GIBRALTAR (REUTERS) – An Iranian tanker caught in the standoff between Teheran and the West shifted position on Friday (Aug 16), but its anchor was still down off Gibraltar and it was unclear if it was ready to set sail soon.

The Grace 1 was seized by British Royal Marines at the western mouth of the Mediterranean on July 4 on suspicion of violating European Union sanctions by taking oil to Syria, a close ally of Iran.

Gibraltar lifted the detention order on Thursday but the vessel’s fate was further complicated by the United States, which made a last-ditch legal appeal to hold it.

The Gibraltar Chronicle newspaper reported that the vessel was unlikely to sail before Sunday, citing an unnamed source who added that it was waiting for six new crew members including a captain to arrive that day.

A lawyer for the Grace 1’s current captain also told the newspaper that his client had asked to be replaced.

The vessel had appeared to be moving and more smoke could be seen coming from the funnel than in recent days. However, it was not clear that the ship was actually leaving, and it still appeared to be at anchor.

Refinitiv data did not show the vessel moving.  Gibraltar’s chief minister, Fabian Picardo, said earlier that the tanker was free to leave as soon as it had organised its logistics.

“Could be today, could be tomorrow,” Picardo told BBC Radio.

The Grace 1 had its name erased and it was no longer flying a Panama flag.  On Friday afternoon a Spanish Civil Guard boat briefly stood close to the tanker with police officers taking pictures. It was closely followed by a Royal Navy boat.

Washington has attempted to detain the Grace 1 on the grounds that it had links to Iran’s Islamic Revolutionary Guard Corps, which it has designated a terrorist organisation.

Asked about Washington’s position, Picardo said that would be subject to the jurisdiction of Gibraltar’s Supreme Court.

“It could go back to the court absolutely.”

The last-minute US intervention was the latest twist in a saga that started in the early hours of July 4, when British Royal Marines abseiled onto the Grace 1 to impound the ship.

That kicked off a sequence of events that saw Teheran seize a British-flagged oil tanker in the Gulf two weeks later, heightening tension on a vital international oil shipping route. 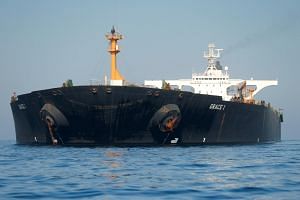 US threatens visa ban on crew of Iran tanker

That tanker, the Stena Impero, is still detained.

The two vessels have since become pawns in a bigger game, feeding into wider hostilities since the United States last year pulled out of an international agreement to curb Iran’s nuclear programme, and reimposed economic sanctions.

Gibraltar said it had found evidence confirming the Grace 1 was carrying its cargo – 2.1 million barrels of oil – to the Baniyas refinery in Syria. Teheran denies that.

Gibraltar Chief Minister Picardo said on Thursday he had agreed to release the ship after receiving written assurances that the cargo would not go to Syria. Teheran also denied that it had made any commitments to secure the release of the tanker.

US Secretary of State Mike Pompeo warned all mariners that if they crewed a ship affiliated to the Revolutionary Guard, they would jeopardise their ability to enter the United States.“#NotWorthIt,” he tweeted.

Calling the US attempt to block the tanker “piracy” and denying any commitments had been made to secure its release, Iranian officials have said Grace 1 would sail shortly after the 25-member crew made preparations including refuelling.

“Based on the owner’s request, the oil tanker Grace 1 will depart for the Mediterranean after being reflagged under the Iranian flag and renamed Adrian Darya after preparing for the journey,” Iranian state television quoted Jalil Eslami, deputy head of the country’s Ports and Maritime Organisation, as saying.