LONDON (REUTERS) - Uber should no longer treat its drivers as self-employed, a British tribunal ruled on Friday (Oct 28), in a decision which threatens the taxi app's business model by forcing it to pay the minimum wage and offer holiday entitlement.

Two drivers brought their case to a British employment tribunal in July, arguing the rapidly expanding app, which allows users to book and pay for a taxi by smartphone, was acting unlawfully by not providing certain employment rights.

The decision could also affect thousands of others who work for firms, including meal delivery services such as Deliveroo, in the so-called "gig economy", where individuals work for multiple employers day-to-day without having a fixed contract.

"This is a monumental victory that will have a hugely positive impact on drivers... and for thousands more in other industries where bogus self-employment is rife," said Ms Maria Ludkin, legal director at the GMB union which brought the case. 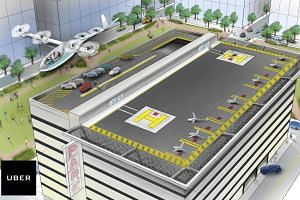 Uber, which is valued at US$62.5 billion (S$87.05 billion) and whose investors include Goldman Sachs and GV, formerly known as Google Ventures, has faced protests, bans and legal action around the world.

The San Francisco-based ride service had argued that its more than 40,000 drivers in Britain enjoy the flexibility of being able to work when they choose and receive on average much more than the minimum wage.

Uber said it will appeal.

"While the decision of this preliminary hearing only affects two people, we will be appealing it," Uber's UK general manager Jo Bertram said.