LONDON (AFP) - Hundreds of demonstrators wearing yellow vests took to the streets of London on Saturday (Jan 12), in the largest protest yet in Britain copying the "yellow vest" protests rocking France.

Protesters opposed to the government's austerity programme and demanding a general election marched through the centre of the capital before rallying in Trafalgar Square.

They included two French activists involved in the demonstrations sweeping France since mid-November who were invited by the organisers of the British event.

"I think that the yellow vest movement in France is the same as the one that is growing in England... people are fed up with poverty, injustice and social and financial injustice."

The French protests began in mid-November over a proposed increase in fuel duties, and soon turned violent.

The leaderless movement appeared to be petering out at the end of 2018 but has since regained momentum, with weekly clashes seen in Paris and other French cities. 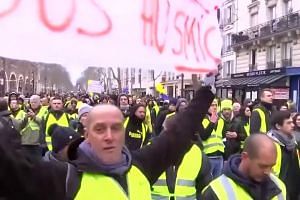 Britain has seen several small protests by Brexit supporters wearing yellow vests since November, but other activists have been slow to adopt the symbolic attire and movement.

'THE UK IS FALLING APART'

"We need a general election now to bring about the fairer, more equal society we all want to live in," he said.

Retired teacher Stephen Hamer, 59, clad in a yellow vest, said the London protest would likely have occurred without the movement in France, but it had "helped things along".

"I think we need a change in government very urgently," he added.

"The UK is falling apart - nothing works anymore."

Delia Hazrati, a health worker in her 50s who had travelled from Kent in south-east England in a yellow vest, told AFP the left in Britain needed to "reclaim" the movement there.

"It's a movement against austerity laws - that's what it's about," she added, noting right-wingers had been "opportunistic" in adopting it.

At the outset, police arrested one of the organisers on suspicion of a public order offence.

It reportedly related to a controversial incident outside parliament on Monday, when a group harangued pro-EU figures, including chanting "Nazi" at prominent Remain supporting MP Anna Soubry during live TV interviews.

Ahead of Saturday's protests Nick Lowles, chief executive officer of the anti-racism group "Hope Not Hate" accused Britain's far-right of "attempting to copy the French 'yellow vests' protests in order to stir up trouble and harass, threaten and attack their political opponents."