ATHENS (AFP) - Greece's public servants are being called to stage a 24-hour strike for Wednesday, the day their country's parliament is to vote on reforms needed to unlock a crucial eurozone rescue.

Their union, Adedy, called for the stoppage in a statement issued Monday, saying it was to show their opposition to the outline agreement with the eurozone. It will also urge the civil servants to take part in a demonstration against the reforms scheduled to take place in front of parliament late Wednesday.

This will be the first strike to happen under the six-month-old government of Prime Minister Alexis Tsipras, who is head of the radical left coalition Syriza. 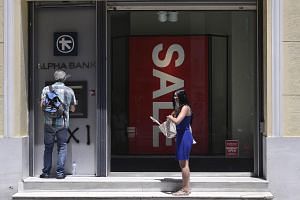 Before coming to power, Syriza participated in stoppages and demonstrations against austerity in 2010 and 2014 which previous conservative governments voted for.

Demonstrations were already to take place in Athens late Monday against the latest reform package, which requires parliament to back tax hikes and pension cuts in return for the eurozone bailout worth up to 86 billion euros (S$129 billion), and against the euro. Without the loan, Greece's economy is likely to shatter, with exit from the euro a very real possibility.

To secure the rescue, Tsipras is going to have to win parliamentary backing, maybe relying on opposition votes if many of his Syriza MPs rebel.

Syriza and its junior coalition partner, the Independent Greeks, are to hold separate meetings on Tuesday to study the reform package.