Toskas had previously offered to resign after the July 23 disaster in the small seaside town of Mati east of Athens, but Prime Minister Alexis Tsipras refused to accept it.

Toskas reiterated his desire to resign again on Friday during a meeting with Tsipras, the statement said.

There have been recriminations over what went wrong and led to the deaths of dozens in Mati where hundreds of people were trapped by towering walls of flames in their attempts to flee.

Many jumped into the sea to survive but others died, either in their cars or when they were cornered on the edge of steep cliffs by the rapidly advancing inferno.

In a statement, Toskas said: "This natural disaster, and the loss of so many people in Mati, overwhelms my desire to continue. This is something I had stated publicly from the first moment.

"I have strived all my life to defend this country and its citizens," Toskas, a retired army general, added. 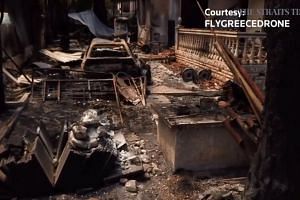 We suspect arson, Greek minister says of wildfire that killed 83

The death toll rose to 88 on Friday when a 35-year-old woman died from her injuries.

Her six-month old baby, the youngest victim, had died in her arms from smoke inhalation as they tried to escape the flames.

Greek authorities say they suspect the fire was set deliberately. Arson is thought to be a frequent cause of forest fires in Greece, a crude method to clear the way for potential development.

Toskas's duties have been assigned to Panos Skourletis, the country's interior minister.