KOS, Greece (AFP) - Greece sent extra riot police to a resort island Wednesday as tensions mounted over a huge influx of migrants, while dozens were missing off Libya after the dramatic Italian rescue of a stricken dinghy.

The police deployment to Kos came after the island's mayor, Giorgos Kiritsis, warned of "bloodshed" if the situation on the island of 33,000 people - where around 7,000 migrants are waiting to apply for immigration papers - worsened.

"Two units, or 40 men, have arrived in Kos. Other reinforcements are being sent from other eastern Aegean islands," a police spokesman said.

Police on Tuesday had beaten back migrants with truncheons and sprayed them with fire extinguishers to prevent a stampede as the arrivals, mostly Afghans and Syrians, were being relocated to a local football stadium after camping along roads and beaches for weeks. 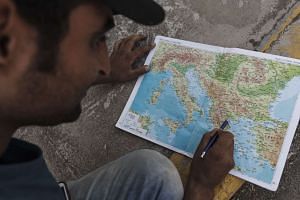 Kiritsis said things had "calmed" on Wednesday but were still tense as thousands waited to be registered.

Meanwhile, in waters off Libya about 60 migrants were missing, the International Organisation for Migration (IOM) said after interviewing survivors who were plucked out from their sinking rubber dinghy.

An Italian corvette, the Fenice, picked up dozens of migrants aboard the dinghy on Tuesday after the vessel was spotted by a naval helicopter.

Fifty-four were brought to the Italian island of Lampedusa, but according to testimony from survivors, the boat had set off with between 117 and 120 people on board, all of them from sub-Saharan Africa, the IOM said.

Back in Greece, local media reports said 250 extra police officers were being deployed across the islands favoured by migrants crossing over by sea from Turkey.

Medical charity Medecins Sans Frontieres (Doctors Without Borders) said its teams in Kos had seen "harassment of migrants and refugees in public spaces, including private security men forbidding them from sitting on park benches in the city centre".

"MSF is very worried about how the situation is evolving in Kos," said Brice de le Vingne, MSF Director of Operations.

"What was previously a situation of state inaction is now one of state abuse, with police using increasing heavy handed force against these vulnerable people," he said.

De le Vingne said MSF had called upon Greek authorities eight months ago to "organise decent and humane reception in the islands of the Dodecanese, specifically on the island of Kos".

Mayor Kiritsis said extra immigration officials had been sent to Kos since the beginning of the week to speed up the administrative procedure.

"We hope that by Friday, the majority of the migrants can be registered and can leave the island."

The island's stadium and the local gymnasium are being used to register the migrants as well as the local police station.

The UN refugee agency's division for Europe said last week that 124,000 refugees and migrants have landed in Greece since the beginning of the year.

The agency said that Athens' response to the problem had so far been "totally shameful", with many of those landing on the eastern Aegean islands near Turkey forced to sleep in the open, lacking access to washing facilities and toilets.

Also on Wednesday, police in Germany arrested a Syrian suspected of helping to set a freighter packed with migrants on a collision course with the Italian coastline.

Italian and German forces, working in tandem, handcuffed the 26-year-old alleged trafficker in the country's northwest and were hunting for his brother, 22, also believed to have played a role in the major maritime drama.

The brothers, plus a third accomplice, were suspected of having helped set the Moldovan-registered Blue Sky M freighter on course for Italy in December before abandoning the controls, locking the engine on and hiding themselves among the 768 asylum seekers on board.

Italy's coastguard managed to board, unlock the engine and bring the vessel under control just 8km from the cliffs.