BRUSSELS (BLOOMBERG) - Alphabet Inc's Google was fined a bigger-than-expected 1.49 billion euros (S$2.3 billion) by the European Union for thwarting advertising rivals in what is likely EU antitrust chief Margrethe Vestager's third and final attack on the US tech giant.

It brings the total Google has been ordered to pay to 8.2 billion euros in EU antitrust probes. The company is making efforts to avoid more fines linked to two older cases and is trying to stop potential new investigations into local and job search services.

Wednesday's (March 20) case focuses on Google's role as an ad broker for websites, targeting exclusivity agreements for online ads with its AdSense for Search product.

That service places text advertising on websites, including retailers, telecommunications operators and newspapers.

The problematic contracts were all dropped by 2016, when the EU escalated the investigation. AdSense contributed less than 20 per cent of Google's total ad revenue in 2015, a percentage which has declined steadily since 2010.

"Google has cemented its dominance in online search adverts and shielded itself from competitive pressure by imposing anti-competitive contractual restrictions on third-party websites," Ms Vestager said in an emailed statement. "This is illegal under EU antitrust rules."

Google has made and will make a number of changes to address EU antitrust regulators’ concerns that it unfairly promoted its shopping service and hindered rivals of its Android smartphone operating system, a senior executive said on Wednesday.

“We’ve always agreed that healthy, thriving markets are in everyone’s interest. We’ve already made a wide range of changes to our products to address the Commission’s concerns,” Mr Kent Walker, senior vice-president of global affairs, said in a statement.

“Over the next few months, we’ll be making further updates to give more visibility to rivals in Europe,” he continued. He did not comment specifically on the EU fine handed down earlier.

The advertising revenues that fuel profits for Google and Facebook Inc are increasingly coming under antitrust scrutiny, often prompted by complaints from media companies as advertising spend shifts to the web.

France's competition authority has flagged the scale of Google's ad business as a potential concern. Germany started an inquiry in February and Dutch regulators have been looking at how media companies generate ad revenue. The UK recently signaled it plans to start its own inquiry. 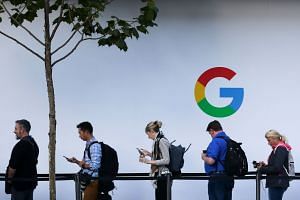 Google appeals against record €4.3b EU fine over Android

The commission last July fined the company 4.3 billion euros and demanded that it change the way it puts search and web-browser apps onto Android mobile devices. A year earlier, Google received a then-record 2.4 billion-euro penalty after regulators accused it of skewing results to thwart smaller shopping search services.

Google has been scathing about the EU probes, claiming they lack evidence.

The AdSense case cites "just a few complaints to justify broad legal claims," one of the company's top lawyers said in a 2016 blog post.

Regulators said in 2016 that the ad deals "artificially reduced the opportunities for Google's competitors on this commercially important market."

The Danish EU commissioner has rejected claims she's singling out US tech giants for special treatment, despite a series of high-profile decisions targeting American companies, including Apple Inc and Amazon.com Inc.