BERLIN (BLOOMBERG) - Chancellor Angela Merkel's government for the first time vetoed a possible Chinese takeover of a German company, signalling a toughening stance towards investments from the country.

The government took the precautionary measure even though Yantai Taihai Group indicated at the last minute that it will withdraw its offer.

The decision follows an Economy Ministry review examining possible negative impacts of the sale that concluded a purchase would raise national security concerns.

Leifeld - based in the city of Ahlen in the state of North Rhine-Westphalia - is one of the leading producers of high-strength metals for the car, space and nuclear industries.

"Germany is well aware of the threat" posed by the Asian country's goal of becoming the leader in advanced manufacturing under the so-called Made in China 2025 programme.

Germany is joining the US and Canada in taking a tougher line on China. Merkel's government has been at the forefront of moves to bring in European Union-wide screening of outside investments after being the target of Chinese acquisitions in recent years.

Policy makers are acting out of concern that China is seeking access to sensitive technology or wants to boost its global influence by acquiring key infrastructure including ports and electricity networks.

Since Germany tightened its measures blocking unwanted takeovers in July 2017, more than 80 deals have been probed, with more than a third of those involving Chinese investors directly or indirectly, an Economy Ministry spokeswoman said.

The government hasn't used the law to block an investment since it was established in 2004.

As part of the tougher approach, Merkel's government swooped in last week to nab a stake in one of the country's largest power-grid operators, thwarting an attempt by a Chinese firm to buy the holding. The Economy Ministry is also looking at further tightening rules on foreign investments in the country from outside the EU.

In May, Canada blocked a proposed takeover of construction firm Aecon Group Inc. by a unit of China Communications Construction Co., while the US House of Representatives in July voted to expand reviews of foreign investment in sensitive industries.

Chinese investment in US technology companies probably would become more difficult and time-consuming under the legislation, with an increased risk of being blocked by a US government panel that examines national security risks.

The German Economy Ministry is looking at lowering the threshold for examining a foreign takeover to purchases of stakes of less than 25 per cent. The country's domestic intelligence service said in July that Chinese acquisitions of high-tech companies in Germany represent a potential national-security threat. 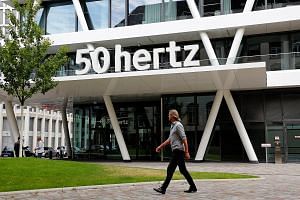 China's trade deal with US leaves Germany squeezed in middle

Trade a key focus for Merkel in China

The German government already last year tightened rules for foreign investors after a public backlash over high-profile acquisitions by Chinese corporations - such as the Midea Group Co. purchase of robot maker Kuka AG in 2016. A Chinese takeover of semiconductor-equipment maker Aixtron SE failed due to US opposition.

The depth of German concern is evident in the government taking action to stop the sale of a relatively small business. Leifeld, owned by the holding company of a former German media executive, had 33 million euros in revenue and 5.2 million euros in earnings before interest, taxes, depreciation and amortisation in 2016, the latest available data on Germany's federal gazette. That year, it received 13.3 million euros of new orders from China.

State Grid Corp. of China had previously been in talks to purchase the holding.