BERLIN (REUTERS) - Foreign Minister Sigmar Gabriel on Monday (Sept 11) equated the Alternative for Germany (AfD) party with the Nazis who ruled the country from 1933 to 1945, an insult rarely heard in national politics.

In an interview with Internet provider t-online.de, Gabriel said many German voters were considering voting for the AfD in the Sept 24 parliamentary election because they felt their concerns about migration, security and jobs were not being addressed.

Founded in 2013 as an anti-European Union party, the AfD shifted its focus from the euro zone debt crisis to immigration after Chancellor Angela Merkel in 2015 opened the doors to over a million migrants, many fleeing war in the Middle East.

"If we're unlucky, then these people will send a signal of dissatisfaction that will have terrible consequences," said Gabriel, a member of the Social Democrats, junior partners in the ruling coalition.

" Then we will have real Nazis in the German Reichstag for the first time since the end of World War II."

The AfD declined to comment on Gabriel's remarks, which came after the Welt am Sonntag newspaper cited what it called a racist email reportedly written by Alice Weidel, a top AfD candidate, to a Frankfurt business associate in 2013. 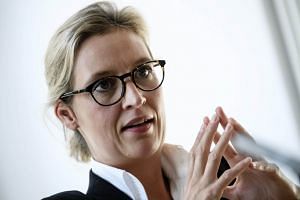 The German government was destroying society by allowing it to be overrun by "culturally foreign people such as Arabs, Sinti and Roma", the newspaper quoted the email as saying.

Weidel's spokesman Christian Lueth, writing on Twitter, dismissed the report as "fake news" aimed at keeping his party out of parliament. He told the Tagesspiegel newspaper that Weidel had assured him the email was not from her.

Lueth declined to comment further when contacted by Reuters.

Other parties also lined up to criticise the AfD, which polls show is on course to enter the national parliament for the first time after the election. The party has seats in 13 of 16 state legislatures.

Bavarian state premier Horst Seehofer, head of the CSU sister party of Merkel's conservatives, dismissed the leaked email as a publicity-seeking "provocation" by the AfD that was best ignored.

Justice Minister Heiko Maas, a member of Gabriel's SPD, said in an essay published in the Frankfurter Rundschau newspaper that parts of the AfD's programme, including on religion, family and Europe, were unconstitutional.

German prosecutors separately launched an investigation into remarks by another AfD official, Alexander Gauland, who said Germany's integration minister should be "dumped" back to Turkey, her parents' country of origin.

Christian Lindner, who heads the pro-business Free Democratic Party that is also poised to win seats in parliament, described the AfD as an anti-liberal and authoritarian party that was completely at odds with his own.

Gabriel urged steps to reverse the AfD's gains in neglected communities and villages of the former communist East Germany.

"We must change course and not only reimburse the cost of taking in migrants, but also give local communities the same amount on top so they can do more for their citizens," he said.

Merkel, whose CDU/CSU conservatives are leading the SPD by double digits in opinion polls, looks poised to win a fourth term. Both her camp and the Social Democrats have ruled out governing in coalition with the AfD.