The three coalition parties had agreed on Tuesday to transfer spy chief Hans-Georg Maassen to the Interior Ministry following accusations that he harboured far-right views.

Maassen had questioned the authenticity of video footage showing radicals hounding migrants in the eastern city of Chemnitz. But their decision sparked public outrage because the senior post they picked for Maassen came with a pay rise.

Some members of the Social Democrats (SPD) - the junior partner in Merkel's coalition - had called for their party to quit the alliance if the decision was not revoked.

The deal unravelled on Friday when Andrea Nahles, leader of the centre-left SPD, said it was a mistake.

A poll published on Thursday had shown 72 per cent of voters had less confidence in the government after the clumsy compromise.

After a meeting between the party leaders on Sunday to hammer out a new compromise, Interior Minister Horst Seehofer said they had agreed Maassen would work in the Interior Ministry in future but would not receive a pay rise. 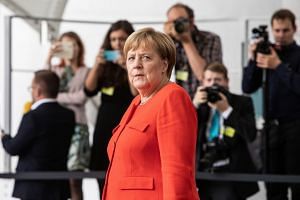 Seehofer said Maassen would be a special advisor focusing on European and international tasks. Before the meeting some SPD members had insisted that Maassen should not be responsible for security or migration issues in his new role.

Seehofer said the decision about pay was a response to the heavy public criticism of the initial plan, but insisted the coalition had not been at risk of falling apart over the affair.

After the coalition's third crisis meeting in 10 days, SPD leader Nahles said in a statement: "The coalition will now dedicate itself to daily business again. We have a lot to do."

The dispute over Maassen comes just two months after Merkel ended a painful row with Seehofer's Bavarian CSU over immigration, related to her decision in 2015 to open Germany's borders to hundreds of thousands of migrants. And the coalition is still divided over how to tackle the problem of diesel cars with high nitrogen oxide (NOx) emissions.

A government source said the coalition committee would meet on Oct 1 to discuss issues including diesel.

Carmakers and German government representatives failed to reach a compromise on Sunday over potential hardware retrofits for older diesel vehicles, with the transport minister saying further talks would take place in the coming week.

EU Budget Commissioner Guenther Oettinger, a member of Merkel's Christian Democrats (CDU), had earlier complained that a year in Europe had been wasted since Germans voted. He said other EU countries expected the government of Europe's largest economy to finally start dealing with European issues.

"It is getting ever harder to explain to European partners ... why the grand coalition keeps getting entangled in new conflicts which are actually of little significance," Oettinger told the Funke newspaper group in an interview published on Sunday.

Wolfgang Kubicki, deputy leader of the opposition Free Democrats, said earlier on Sunday the saga showed the alliance had deeper problems, and new elections should be called.

CDU general secretary Annegret Kramp-Karrenbauer had written to party members to say the CDU thought Sunday's talks should be used to clarify whether the coalition partners "can continue to unite together behind the common mission".

An Emnid poll had on Saturday shown combined support for Merkel's CDU and Seehofer's Christian Social Union (CSU) slumping to a record low of 28 per cent, while the far-right Alternative for Germany - which has backed Maassen - was at 16 per cent, just behind the SPD on 17 per cent.