HAMBURG (AFP) - World leaders made concessions on trade and climate language to Donald Trump on Saturday (July 8) at the end of the most fractious and riot-hit Group of 20 summit ever, in exchange for preserving a fragile unity of the club of major industrialised and emerging economies.

But the gesture opened the door for others, with Turkish President Recep Tayyip Erdogan warning that Ankara was now leaning towards not ratifying the landmark Paris climate accord.

Erdogan’s threat brought further disarray to a summit that was marred by bilateral quarrels and strife over climate protection and trade.

And in one of the weekend’s more bizarre scenes, Trump raised eyebrows by leaving a discussion and letting his daughter Ivanka take his place.

In a departure from final summit declarations that tend to outline consensus on issues that range from fighting terrorism to financial governance, the extraordinary conclusion this year spelt out differences on core issues.

It acknowledged Trump’s decision to take the United States out of the 2015 Paris deal and clearly stated Washington’s wish to continue using and selling fossil fuels that are a main driver of global warming.

The declaration also stated for the first time the right of countries to protect their markets with “legitimate trade defence instruments” – wording that essentially gives Trump wiggle room to push on with his “America First” policy.

The nationalistic stance has set him on collision course with many of America’s allies, who warned Trump against an isolationist path and starting a trade war.

“Where there is no consensus, the communique spelt out the discord,” said host Chancellor Angela Merkel.

But with Trump determinedly leading the US out of the climate accord ratified by 153 countries, Erdogan said he was leaning towards not completing the ratification process.

“After that step taken by America, the position that we adopt is in the direction of not passing it in parliament,” Erdogan said.

He also suggested some other, unidentified G-20 countries had a “problem” with the agreement.

Thomas Bernes from the think-tank Centre for International Governance Innovation described the final declaration as a “masquerade”.

“When compared to the G-20 dynamic since the London summit in 2009, it’s a step back: a clear signal against protectionism to fight the financial crisis becomes a mixed signal.” .

If the meetings within the tightly secured venue were anything but harmonious, outside chaos and violence gripped Germany’s second city.

The clashes blocked US First Lady Melania Trump at her residence on Friday, forcing G-20 organisers to completely alter a programme for spouses of visiting leaders.

On Saturday, thousands of anti-riot cops were again on guard, as helicopters hovered overhead, with tens of thousands of demonstrators on the march.

Host Merkel herself admitted that “deep differences” remain with Erdogan after they met on the sidelines of the summit.

But it was Trump’s first head-to-head with Russia’s leader President Vladimir Putin that stole the show. 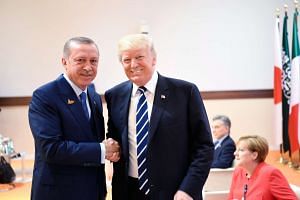 Turkey's Erdogan threatens not to ratify Paris climate accord, suggests other countries having doubts 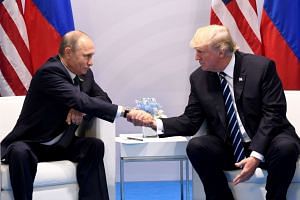 A day after Trump slammed Moscow’s actions in Ukraine and Syria, the two men had a “robust and lengthy exchange” about allegations of Russian meddling in the 2016 US election, Secretary of State Rex Tillerson said.

But Tillerson, who was present at the meeting that ran for two hours and 15 minutes, also said the two alpha-male leaders “connected very quickly” with “very clear positive chemistry”.

Trump said Saturday that the tete-a-tete was “tremendous” while Putin gave an upbeat assessment of what it meant for future ties.

“There is every reason to believe that we will be able to at least partially re-establish the level of cooperation that we need,” Putin said.

After scoring at his Russian encounter, Trump turned to another thorny meeting, this time with Chinese President Xi Jinping.

Entering into talks, Trump told his Chinese counterpart that “something has to be done” on North Korea.

Xi said that at the same time as making “necessary responses” to North Korea contravening UN resolutions, there should be stepped-up efforts to promote talks, Xinhua added.

In a summit with its fair share of odd and awkward moments, it was Ivanka’s appearance at one discussion alongside Xi, Merkel and Erdogan that caused the biggest stir.

Historian Anne Applebaum took to Twitter to denounce what she described “an unelected, unqualified, unprepared New York socialite” being seen as “the best person to represent American national interests.”

Merkel though sought to play down the case, saying that it is “in line with what other delegations do”.