MOSCOW (AFP) - A China-funded project to bottle water from Russia's Lake Baikal has caused a backlash in Siberia, where people are increasingly angry about what they see as a Chinese land-grab.

Ecologists and local authorities have previously touted bottling the water of the world's largest lake as a "green" way of profiting from Siberia's natural resources.

But a petition calling on Russian "patriots" to demand the removal of an under-construction "Chinese plant on the shores of our Lake Baikal" has gathered almost a million signatures.

The water "will be shipped to China", the petition says, warning that the facility will block local access to the lake and "inflict irreparable damage" to the Unesco World Heritage Site.

The campaign to shut down the project has spread across social media in recent months without involvement by major environmental NGOs.

The plant was already under construction on the southern tip of the lake, which holds one-fifth of the planet's fresh water.

But on Friday, following the backlash, a Russian court ordered that building work be halted until complaints of violations could be investigated.

The company building the plant, previously lauded by the regional government, says it is surprised by the criticism.

The plant in question, in the village of Kultuk, is built by the Russian AkvaSib company, which had plans to start production later this year.

But the financial backing comes from a company called "Baikal Lake" based in China's Daqing, according to a statement from the Irkutsk authorities in 2017, when they gave the US$21 million (S$28.36 million) project priority status.

AkvaSib representative Alexei Azarov said it passed through necessary hearings and got the green light after an environmental assessment.

"Nobody was against it" at the time, he told AFP. 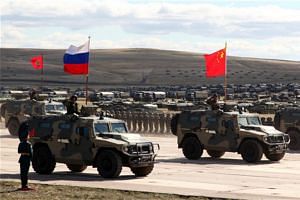 Mr Azarov said the facility would not close off village access to the lake, and would provide the locals with 150 jobs, and authorities with tax revenue.

Siberian environmentalist Alexander Kolotov said there were some problems with the plant's location, but that the "anti-China factor is very clear" in the current protest.

The case "hits the bullseye of the fears and stereotypes of modern Russians, that 'China will gulp down our national heritage'."

It follows similar protests against China cutting down forests across Siberia, which have led some regions to cancel agreements with Chinese companies.

Chinese presence in the region exploded after the rouble crashed in 2014 and the Russian government eased tourist visa restrictions.

As tourism and business grew, so did local distrust.

Last week a state TV report, Baikal on Tap, focused on a Chinese hotel for Chinese tourists officially listed as a private home.

The TV crew unsuccessfully tried to interview the man in charge, who did not speak Russian.

"Where is your food permit?" the presenter shouted as the tourists consumed their lunch, ignoring her.

"What kind of food is this?" she asked, opening pots.

"For Siberians, there are two things that are like a red rag to a bull and cause an immediate reaction," said Ms Svetlana Pavlova, chief editor of Irkutsk-based IRK.ru news website.

"One is the Chinese, which 'have taken over everything and leave trash', and the second is encroachment on the lake. And here it so happens that the company building the plant is 99 per cent-owned by Chinese nationals."

She said the construction boom of often illegal hotels infuriates locals because they themselves cannot get permission to build anything on the protected shore.

Locals also don't earn money from Chinese tourists who are serviced by Chinese firms on Baikal, she said.

"There has been a cumulative effect" which resulted in the anti-plant backlash, Ms Pavlova added. "People are tired of government inaction."

Mr Denis Bukalov, a campaigner against the project based in Irkutsk, however, said, "it's not not important that it's the Chinese."

Construction had "ruined" the shoreline in Kultuk after the "illegal" portioning off of land, according to the campaigner.

He said the plant set a dangerous precedent.

"You can see on the map of registered land ownership that seven parcels of land are set aside for bottling water" nearby, he said.

"They will turn Baikal into a swamp," he told AFP.

Ecologists point out the project has not accounted for its location on wetlands important for birds.

The area is a key feeding ground during migration seasons, with 130 different bird species recorded there.

Some of those have protected status, said biologist Igor Fefelov of the Russian Bird Conservation Union.

This "was not even mentioned" in the plant's environmental assessment, he said.

Irkutsk region governor Sergei Levchenko, who backed the plant in 2017, has flipped 180 degrees in the face of growing protest.

"The site is environmentally protected land on all sides," he said this week. "I think this is insurmountable. I don't see the potential for bottling water there."

Environmentalist Kolotov said the project would likely turn off others from efforts to experiment with green businesses on the lake.

"It's as if the project was designed especially to discredit the idea of bottling Baikal water," he said.