PARIS (AFP) - Travellers across France endured a fifth day of turmoil on Monday (Dec 9) amid a massive strike over planned pension reforms, as the government held a final meeting with union officials before unveiling details of the overhaul this week.

Unions have vowed to keep up the fight until President Emmanuel Macron abandons the plan, with another mass demonstration planned in Paris and other cities on Tuesday.

Most Paris metro lines were shut completely while others provided only a few trains during rush hour - leading to huge traffic jams in the capital - with network operator RATP forecasting similar disruptions for Tuesday.

Just one in five high-speed TGV trains were running, and while no flight cancellations were announced for Monday, Air France has cut 25 per cent of domestic flights on Tuesday and 10 per cent of its shorter international flights.

Some Paris museums were again forced to close some exhibits, and both the Opera Garnier and the Opera Bastille again cancelled performances on Monday.

With many having opted to work from home last week and only now returning to the workplace, this week will test public support for the strike.

"Psychologically it's stressful because you don't know if you're going to get where you need to, you have to wake up earlier - it's one of the joys of life in Paris," said Benit Ntende, who was waiting for a train at Paris' Saint-Lazare station.

A poll Sunday in the Journal du Dimanche newspaper showed 53 per cent of the French supporting the strike or expressing sympathy for their demands, up six points in a week. 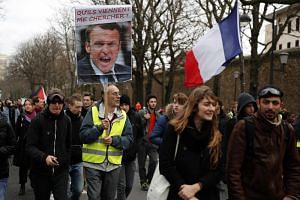 Macron braces for second week of protests against pension reform

On Wednesday, the government will present the full details of its plans for a single points-based pension scheme that does away with dozens of more advantageous plans enjoyed by train drivers, sailors, lawyers and other professions.

Critics say it will effectively force millions to work longer or face curtailed benefits, despite Macron's promise he would not touch the official retirement age of 62.

Jean-Paul Delevoye, who is leading the pensions negotiations with unions, held a final meeting with union leaders on Monday to try to end the strike.

But unions appear in no mood for further negotiations, after staging their biggest show of strength in years, with some 800,000 people turning out at the strike's debut last Thursday.

"I will not negotiate over the implementation of what I describe as a monstrosity which endangers tomorrow's pensioners," said Yves Veyrier, the head of the militant Force Ouvriere union.

Teachers in particular are expected to walk out again on Tuesday, raising the prospect of widespread school closures.

The strike has squeezed retailers in the run-up to Christmas, raising the prospect of another bleak year-end after the unrest caused by the yellow vests in late 2018.

"This weekend was catastrophic: Paris was empty, restaurants and brasseries, even fast-food was impacted, with some losing up to 50 per cent of their sales," a spokesman for the GNI-Synhorcat alliance of restaurant and hotel owners said.

Jacques Baudoz, president of the Joueclub chain of toy stores, told Europe 1 radio that revenue dropped 20 per cent at stores in larger cities.

Macron, Prime Minister Edouard Philippe and senior Cabinet ministers met late Sunday to discuss the changes, and are set to meet again on Tuesday night before Philippe presents the plan on Wednesday.

"If we do not carry out a far-reaching, serious and progressive reform today, someone else will do a really brutal one tomorrow," Philippe told Le Journal du Dimanche.

France brought to standstill by biggest strike in years

Unions are hoping for a repeat of 1995, when three weeks of strikes forced the then centre-right government to withdraw its pension reforms.

Adrien Quatennens, a lawmaker from the far-left France Unbowed party, acknowledged on LCI radio that the strike was hard on businesses and commuters, but said "it's better to endure a few weeks of hassle than... years of hardship" in retirement.