(Bloomberg/AFP) - French police detained 208 people and kept a total of 174 in custody, after activists clashed with police in Paris on Sunday (Nov 29) ahead of key climate talks, Interior Minister Bernard Cazeneuve said.

The minister said the acts of violence in central Paris by the protesters, who hurled bottles and candles at police, must be “firmly” condemned.

Television images on Sunday showed demonstrators throwing projectiles at police who charged crowds and dragged people away near the Place de la Republique, a traditional rallying place for marches in the capital.

Earlier in the day, people forming a human chain called on more than 140 world leaders meeting in Paris for United Nations- sponsored talks to reach a global agreement to lower carbon emissions. France banned demonstrations as part of a state of emergency following the Nov 13 terrorist attacks, and some environmental groups like Greenpeace have criticised the restrictions. 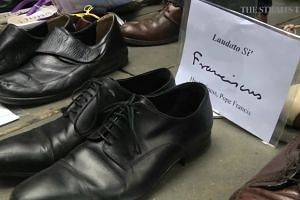 "No one was hurt," Michel Cadot, the head of Paris police, said at a press conference broadcast by iTele television. "The demonstration turned a little violent, but it was kept under control. Police used restraint."

Small, organised groups of masked protesters "were looking" for confrontation and threw bottles and other projectiles at police, Cadot said.

The Interior Ministry cancelled a series of public demonstrations planned during the COP21 climate talks, which officially get under way Monday and will attract around 40,000 delegates and heads of state including US President Barack Obama and China's Xi Jinping.

In response to the attacks, the government has closed some major arteries around the capital until late Monday to allow transport of heads of state.

In addition to the human chain, Parisians laid thousands of pairs of shoes on the Place de la Republique to symbolize the pro-climate-deal march that was banned. The government also placed about two dozen environmentalists deemed a risk to public order under effective house arrest, Interior Minister Bernard Cazeneuve said Saturday.