PARIS (REUTERS) - France's prime minister will present plans on Monday (March 18) to crack down on rioters, his office said, after a new flare-up of violence linked to the yellow vest protest movement.

Rioters ransacked stores and restaurants while lighting fires along Paris' Champs Elysees avenue on Saturday as they clashed with police.

Cutting short a weekend ski trip, President Emmanuel Macron returned to Paris late on Saturday for a crisis meeting with ministers at which he ordered decisions to be taken rapidly "so this doesn't happen again".

"Drawing conclusions from these shortcomings, the prime minister will present the president tomorrow with measures necessary to adapt the security forces stance so they can act with firmness at any time," it said in a statement.

Cleaners swept up broken glass, while shop owners boarded up smashed windows on Sunday after the worst unrest in central Paris since violence peaked before Christmas in a weekly series of protests.

Vandals left hardly a storefront or cafe unscathed on Saturday, breaking windows and looting luxury stores as they clashed with riot police.

Two newstands were burnt to their metallic frames and in a nearby street a bank branch was set on fire, badly damaging the building and apartments above it. 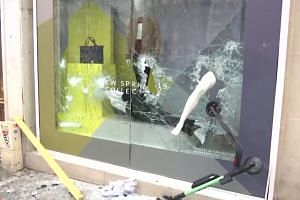 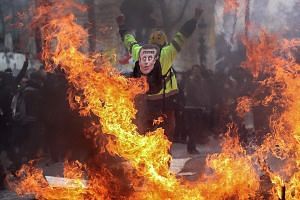 "I'm not a tourist but if I were, I would be quite surprised if I arrived in Paris to find the Champs Elysees in such condition," a pensioner who only gave his name as Serge told Reuters TV.

"People often talk about the 'City of Lights', the 'Fashion Capital' and all that, but all you can see is destruction, rubbish, protests, burnt kiosks," he added.

Police estimated that 10,000 people joined the latest yellow vest protest in Paris and Interior Minister Christophe Castaner said a hard-core of about 1,500 was intent on causing trouble.

"We've got to be able to stop these people, I don't know how, but that's what we've asked the prime minister," Jean-Noel Rheinhardt, who heads a committee representing businesses on the Champs Elysees, told BFM TV.

The protests quickly spiralled into a broader movement against Macron, his pro-business reforms and elitism in general.

The demonstrations, held every Saturday in Paris and other cities, have been generally getting smaller since December, when Paris saw some of the worst vandalism and looting in decades.

After the spike in violence, Macron offered a package of concessions worth more than 10 billion euros (S$15 billion) aimed at boosting the incomes of the poorest workers and pensioners.