PARIS (BLOOMBERG) - Protesters in France staged another round of marches on Saturday (March 2), though their numbers dropped sharply from a week earlier.

Protests by the so-called Yellow Vests, named after drivers' safety jackets, have roiled the country weekly since November.

Initially triggered by a planned increase in gasoline taxes, the movement has morphed to include a series of disparate grievances against higher taxes and falling purchasing power, as well as calls for French President Emmanuel Macron's resignation.

The grassroots movement has lost steam in recent weeks.

This was the 16th Saturday in a row of protests.

Macron has been taking part in a series of national public debates he set up to help address the protests. 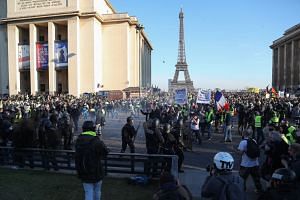 He also announced €10 billion (S$15 billion) of budget giveaways, including a boost to the minimum wage.

More than 75 per cent of French people initially supported the yellow vests, according to opinion polls.

The repetition of protests, along with the violence, has made the movement less popular, with a majority of French now supporting an end to the demonstrations.

Macron said on Friday that grassroots yellow-vest protests are no longer comprehensible and that "the country needs a return to calm."