Mr Macron - on a visit to the north-eastern village of Colombey-les-Deux-Eglises, known as the home and burial place of the former president - made his comments after speaking to a pensioner who complained he only had a small pension.

Mr Macron said the grandson of the general (Charles de Gaulle) told him a little while ago that his grandfather's rule was: "You can speak freely, the only thing we should not do is to complain."

"I think that the general had the right idea. The country would be different if everyone did the same," Mr Macron said.

"We don't realise how lucky we are. We are seeing more and more elderly people in our country in good health," he added.

Reacting on Twitter, leader of France's far-right National Rally - formerly the National Front - Ms Marine Le Pen, wrote: "Those who complain don't do it just for the fun of it but because they are the victims of non-stop tax rises and endemic insecurity."

Mr Marcon's comments came a week after the government unveiled billions of euros in tax relief for businesses and households, alongside more budget cuts. 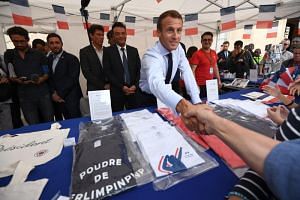 Pensions and welfare benefits will be shaved further in the 2019 budget - Mr Macron complained in June that France spends "a crazy amount of dough" on social programmes.

In August, he also came under attack from the opposition after he described the French as "Gauls who are resistant to change" during a trip to Denmark.

Mr Macron made the comments in an exchange with French expatriates in the Scandinavian country, which he admires for its economic model that mixes a strong social security system with rules allowing companies to easily fire workers.