"I really regret saying it because it has caused all this eruption," the veteran politician told LBC radio, amid a controversy that threatens to damage Labour's chances ahead of regional elections next week.

But he said Israeli Prime Minister Benjamin Netanyahu had made similar remarks, adding: "I never regret saying something that is true."

Mr Livingstone was suspended from the centre-left party on Thursday after saying Hitler initially wanted to move Jews to Israel, and "was supporting Zionism before he went mad and ended up killing six million Jews". 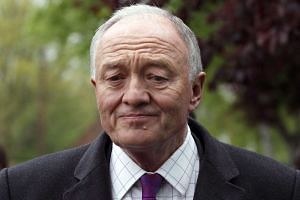 His comments came in defence of Labour lawmaker Naz Shah, who was suspended on Wednesday in the face of widespread criticism for sharing anti-Semitic posts on social media two years ago.

Labour leader Jeremy Corbyn has announced an independent review into racism in the party as he seeks to contain the row ahead of elections for devolved assemblies in Scotland and Northern Ireland and the London mayor next week.

Mr Livingstone, a long-time ally of Mr Corbyn who was mayor from 2000 to 2008, denied he was anti-Semitic, insisting: "My entire time in politics has been defending minorities."

He accused "embittered" Labour MPs who disliked Mr Corbyn, a long-time socialist who was elected last year, of trying to whip up the row to undermine his authority.

"The real appalling thing here is dishonest MPs who know that what I have said is true and stood up all this nonsense because they want to damage our chances at the local election, so they have a chance of undermining Jeremy," Mr Livingstone said.

In a speech to the World Zionist Congress in October, Mr Netanyahu suggested Hitler was not planning to exterminate the Jews, but expel them, until he met the Grand Mufti of Jerusalem Haj Amin al-Husseini, a Palestinian nationalist, in 1941.

The comments were widely criticised, and Mr Netanyahu later insisted he had no intention of exonerating Hitler.

More than 80 Jewish members or supporters of Labour wrote a letter to the Guardian newspaper on Saturday, denying that anti-Semitism was rife in the party.

"The tiny number of cases of real anti-Semitism need to be dealt with, but we are proud that the Labour party historically has been in the forefront of the fight against all forms of racism," they wrote.