OSLO (AFP) - Yazidi activist Nadia Murad, a survivor of sex slavery by the Islamic State in Iraq and Syria (ISIS), implored the global community to help free hundreds of women and girls still held by the militants in her Nobel acceptance speech on Monday (Dec 10), saying the world must protect her people.

"The protection of the Yazidis and all vulnerable communities around the world is the responsibility of the international community," Ms Murad told the ceremony in Oslo.

The 25-year-old shares the Nobel Peace Prize with Congolese doctor Denis Mukwege, who has spent more than two decades treating appalling injuries inflicted on women in the Democratic Republic of Congo's war-torn east.

Nobel committee chairman Berit Reiss-Andersen said the pair were "two of the strongest voices in the world today".

"The fight for justice unites them, despite their very different backgrounds," she said on Monday.

Ms Murad wept during Ms Reiss-Andersen's description of the suffering of her people.

She survived the horrors of captivity under the ISIS where they targeted Ms Murad's Kurdish-speaking community. 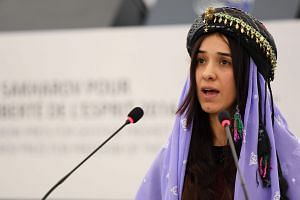 Older women and men faced summary execution during the ISIS assault, which the United Nations has described as a possible genocide.

Captured in 2014, she suffered forced marriage, beatings and gang-rape before she was able to escape.

In her Nobel acceptance address on Monday, Ms Murad said that thousands of women and girls from her community had been kidnapped, raped and traded "in the 21st century, in the age of globalisation and human rights".

The fate of some 3,000 women and girls is still unknown.

"Young girls at the prime of life are sold, bought, held captive and raped every day. It is inconceivable that the conscience of the leaders of 195 countries around the world is not mobilised to liberate these girls," she said.