Sarkozy was released from under judicial supervision after two days of questioning over allegations that his 2007 election campaign received funding from the late Libyan leader Muammar Kadhafi, the source said.

He is being investigated for illicit campaign financing, misappropriation of Libyan public funds and passive corruption, the source said confirming a report in Le Monde newspaper.

Sarkozy, 63, had arrived just before 8am (3pm Singapore time) at the bureau of officers specialising in corruption, money laundering and tax evasion in the western Paris suburb of Nanterre, an AFP journalist said. He had initially been taken into custody on Tuesday morning before being released.

Since 2013, investigating magistrates have been probing media reports, as well as statements by Kadhafi's son Seif al-Islam, that claimed funds were provided for Sarkozy's run at the presidency.

The case is France's most explosive political financing scandal and one of several legal probes that have dogged the right-wing politician since he left office after one term in 2012.

Brice Hortefeux, a Sarkozy ally who was a top minister during his presidency, was also questioned on Tuesday until about 11.30pm.

"Testifying freely, the details provided should put an end to a series of errors and lies," Hortefeux later wrote on Twitter.

Under French law Sarkozy can be held for questioning for up to 48 hours, after which he can be either released, told to return for further questioning later, or brought before a judge to potentially face charges.

In 2011, as Nato-backed forces were driving Kadhafi out of power, Seif al-Islam told the Euronews network that "Sarkozy must first give back the money he took from Libya to finance his electoral campaign."

Sarkozy has dismissed the allegations as the rantings of vindictive Libyan regime members who were furious over France's military intervention in Libya that helped end Kadhafi's 41-year rule and led to his death. 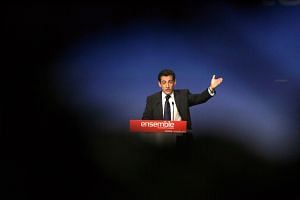 He has also sued the investigative website Mediapart, which has led media coverage of the Libyan allegations since 2012, publishing a document allegedly signed by Libya's intelligence chief showing that Kadhafi had agreed to fund Sarkozy to the tune of 50 million euros (S$81 million).

The case drew heightened scrutiny in November 2016 when a Franco-Lebanese businessman admitted delivering three cash-stuffed suitcases from the Libyan leader in 2006 and 2007 as contributions towards Sarkozy's first presidential run.

In an interview, again with Mediapart, Ziad Takieddine claimed he provided 1.5 to 2 million euros in 200-euro and 500-euro notes each time and was given the money by Kadhafi's military intelligence chief Abdallah Senussi.

The legal investigation is looking into these allegations, as well as a 500,000-euro foreign cash transfer to Sarkozy ally Claude Gueant, and the sale of a luxury villa in 2009 in the south of France to a Libyan investment fund for an allegedly inflated price.

Sources close to the inquiry say it was expanded in January to include suspected "illegal campaign financing," after police issued a report indicating large amounts of cash spending by Sarkozy's team during the 2007 campaign.

Campaign treasurer Eric Woerth and a deputy, Vincent Talvas, told investigators the money was provided by anonymous donors and totalled 30,000 to 35,000 euros.

Those claims have been contested by former campaign employees, the source said.

It is not the first time Sarkozy has been brought in for questioning: In July 2014 he became the first former French president to enter police custody over a separate inquiry into claims that he tried to interfere in one of several investigations that have dogged him since leaving office.

Investigating magistrates have recommended that Sarkozy face trial on separate charges of illegal campaign financing over his failed 2012 re-election bid.

He faces up to a year in prison if convicted, but he is appealing the decision to send him to trial, claiming he knew nothing about the fraudulent practices that Bygmalion executives have admitted to.

Sarkozy failed with a comeback bid for the presidency in November 2016 and has stepped back from frontline politics since then, though he remains a powerful figure behind the scenes at the rightwing Republicans party.