LONDON (REUTERS) - For Britons wearied by the endless contortions of their country's exit from the European Union, the impending birth of Prince Harry and his American wife Meghan's first baby is set to provide some welcome light relief.

Even though the child will only be seventh in line to the British throne, such has been the interest in the Duke and Duchess of Sussex, as Harry and Meghan are officially known, that the birth is set to grab headlines across the globe. The baby's gender has not been revealed.

"There will be huge interest in Harry and Meghan's baby," said Ms Ingrid Seward, editor of Majesty magazine. "It's another potential grandchild for Diana, it's the mixture of Harry and Meghan, and it's less than a year since they were married so the interest is going to be enormous."

There has long been fascination with the British royal family, particularly in the United States, and the younger members such as Harry, 34, his elder brother William, 36, and their spouses are regularly greeted by large crowds and feted like film stars.

Some two billion people were estimated to have watched the 2011 wedding of William to wife Kate, and tens of millions tuned in to see the marriage of Harry, son of heir-to-the-throne Prince Charles and his late first wife Diana, to US actress Meghan at Windsor Castle last May.

Their union, bringing together royalty and celebrity, has proved an irresistible combination for the world's media. 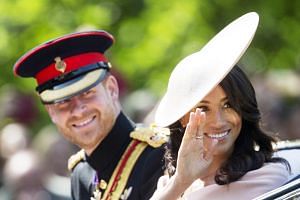 "The fairytale of... the prince falling for the American actress and for sort of the Hollywood side of her life, the fact she was on a Netflix TV show and now... she's attending royal engagements so I think that definitely creates a wider interest."

During an event in January, Meghan, 37, revealed that she was six months pregnant and she is not expected to carry out any more official engagements before the birth.

"It's all very exciting," said Ms Rosie O'Dea, 25, as she walked across Westminster Bridge near Parliament. "It's showing that the royal family is a little bit more progressive than maybe thought before, with Meghan from the States and a bi-racial baby and everything and that's brilliant." "You know I think they kind of need to show that they're in keeping with the times as well," she added.

Leon Campbell, who was skateboarding near the London Eye ferris wheel, said the couple had helped change perceptions about the royals.

"I'll be more interested in this (royal baby) because Harry is the cool one, ... he's the wild card, he's the ginger one," he said. 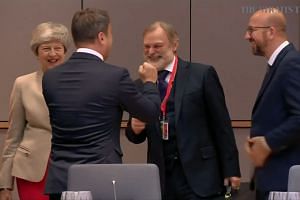 Veteran royal editor Robert Jobson from London's Evening Standard newspaper said it would be a very special baby whose arrival would match the excitement generated by the birth of Prince George, William's first son and a future king.

"The reality is Meghan - American, divorcee, bi-racial, marries Prince Harry - their child is going to be an incredibly important child in terms of the monarchy but also in terms of America. You know she is very much America's princess," he told Reuters. "I have not seen this much interest in anybody, not even Kate when she married Prince William."

However, in the same way many Britons have complained of Brexit boredom and the incessant media coverage it generates, some are hardly thrilled by the prospect of the another royal.

"Everyone has babies ... so frankly I don't care," said Ms Donna Smith, sitting a cafe at an east London market.

But for those whose job it is to document the royals, there is no doubting the interest the new baby will generate.

"It could be 27th (in line to the throne) - it's Harry's baby, Harry and Meghan are the big story now," said photographer Arthur Edwards, who has covered the royals for the Sun tabloid for more than four decades.

"He is much loved here by the people. There'll be huge crowds at the hospital when they bring the little baby out."