HELSINKI (AFP) - Covid-19 has done little to alter the ranking of the world's happiest countries, with Finland at the top for a fourth year running, an annual UN-sponsored report said on Friday (March 19).

The researchers behind the World Happiness Report, now in its ninth year, used Gallup data asking people in 149 countries to rate their own happiness, also taking into account measures such as GDP, social support, personal freedom and levels of corruption to give each nation a happiness score, which is an average of the past three years.

Once again, the top spots were dominated by European countries - with Denmark coming second, followed by Switzerland, Iceland and the Netherlands.

New Zealand, falling one place to ninth, was again the only non-European nation in the top 10.

Singapore ranked 32 on the list. Australia came in at 11th and Taiwan 24th.

Other climbers included Germany, up from 17th to 13th, and France, rising two to 21st.

African nations Lesotho, Botswana, Rwanda and Zimbabwe came at the bottom of the table, but ahead of Afghanistan which was classed as the world's unhappiest nation this year.

The authors also compared this year's data to previous years' averages to gauge the impact of the pandemic, and found "significantly higher frequency of negative emotions" in just over a third of the countries.

But positive emotions increased in 22 countries, and "surprisingly there was not, on average, a decline in well-being when measured by people's own evaluation of their lives," John Helliwell, one of the report's compilers, said in a statement.

"One possible explanation is that people see Covid-19 as a common, outside threat affecting everybody and that this has generated a greater sense of solidarity and fellow-feeling."

Author Jeffrey Sachs meanwhile warned that "we need urgently to learn from Covid-19", adding that "we must aim for well-being rather than mere wealth".

Finland, which throughout the health crisis has reported some of Europe's lowest incidences of the coronavirus, "ranked very high on the measures of mutual trust that have helped to protect lives and livelihoods during the pandemic", the authors said.

Finland's top spot in the happiness list has previously been met with raised eyebrows in the country whose population of 5.5 million is said to shy away from spontaneous demonstrations of joy, valuing instead the quiet and solitude of the country's vast forests and thousands of lakes.

The northern country's long dark winters were reputed to be behind high levels of alcoholism and suicide, but a decade-long public health drive has helped cut rates by more than half.

Finland's residents enjoy a high quality of life, security and public services, with rates of inequality and poverty among the lowest of all OECD countries. 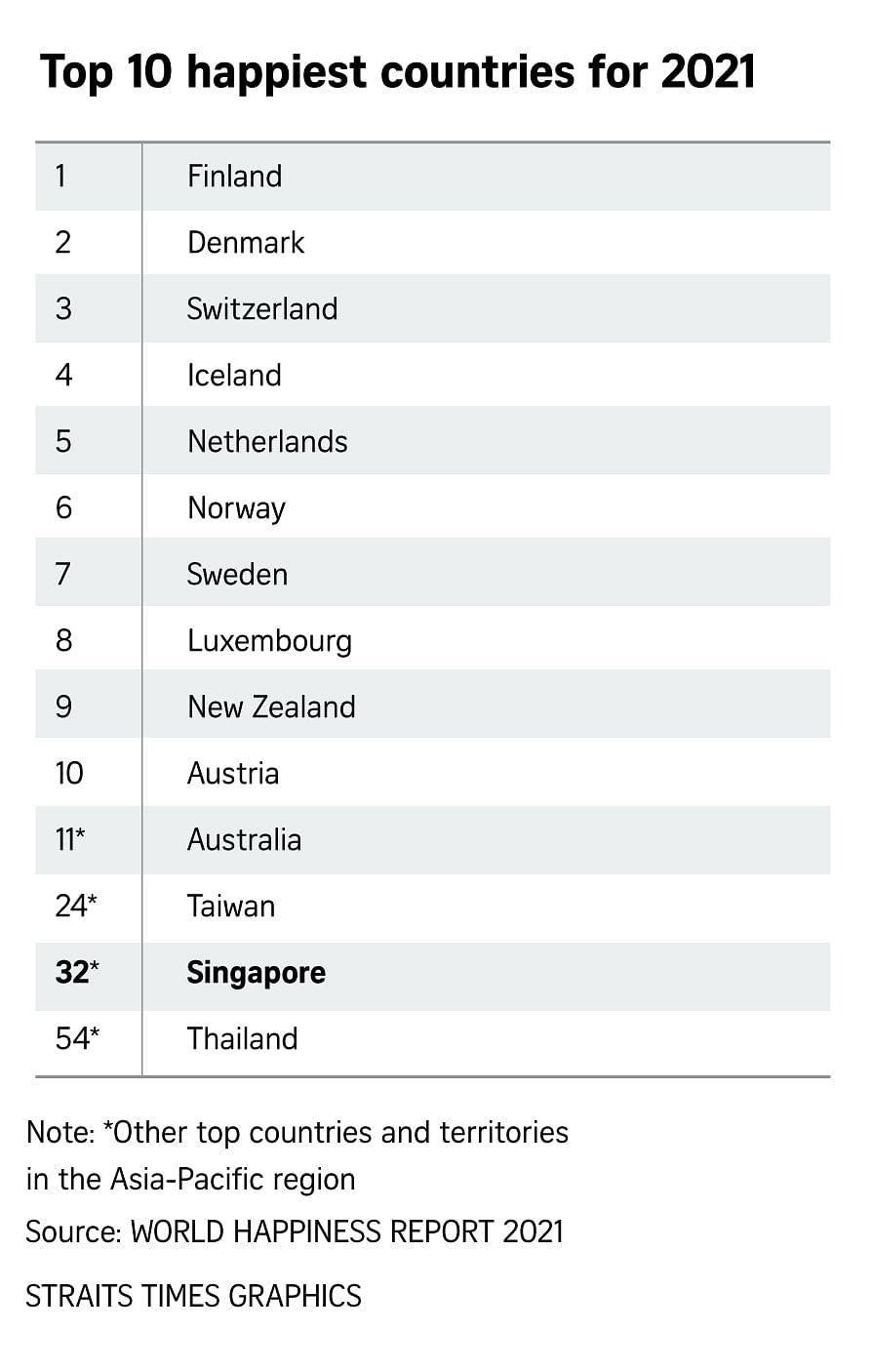