PARIS/BERLIN (AFP) - Dubbed a liar by his French counterpart and lampooned as a "political jester" in European newspapers, chief Brexit campaigner Boris Johnson faced a wave of criticism and mockery on Thursday (July 14) after being named Britain's foreign minister.

In a shock move, new Prime Minister Theresa May on Wednesday appointed the eccentric former London mayor, known for his political antics and gaffe-prone style, as the top diplomat to lead the country out of the EU.

French Foreign Minister Jean-Marc Ayrault said that, as a "Leave" campaigner, Mr Johnson had "lied a lot" and said his appointment "reveals the British political crisis" following the referendum.

Mr Ayrault claimed he was not worried about working with Mr Johnson but stressed the need for a "clear, credible and reliable" negotiating partner. 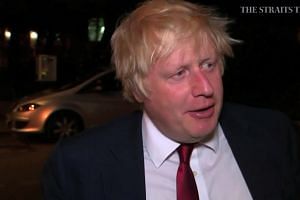 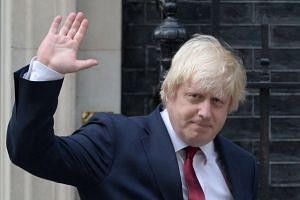 "The United Kingdom has to break this dangerously vicious cycle which has direct impacts on the rest of Europe," Mr Schulz said.

Animosity is widespread in Europe about Mr Johnson, who recently compared the EU's aims to those of Adolf Hitler.

German Foreign Minister Frank-Walter Steinmeier, speaking on Wednesday shortly before the news of Mr Johnson's appointment, said he was outraged by Britain's "irresponsible politicians who first lured the country into Brexit, then ... got out, refused to take responsibility, and went to go and play cricket".

Many governments, in line with protocol, congratulated their new counterpart, who will make his diplomatic debut in Brussels next week.

A US State Department spokesman told reporters that "we look forward to engage with Boris Johnson" and that the US-Britain relationship "goes beyond personalities".

The foreign ministers of Latvia, Estonia and Norway were others who said they looked forward to meeting Johnson.

In Russia, Kremlin spokesman Dmitry Peskov voiced hopes that "the weightiness of his current position, of course, will certainly prompt a somewhat different rhetoric of a more diplomatic nature."

Most newspapers and social media, however, treated the appointment as the latest act in a political theatre of the absurd.

Germany's Handelsblatt called Mr Johnson a "political jester", the daily Sueddeutsche labelled his appointment an example of "British humour", while the French L'Obs news magazine's headline was simply "King of the Blunder".

Germany's Die Welt said many initially thought the "bombshell" appointment was a joke.

"The fact that Theresa May is ... appointing, of all people, this undiplomatic, unpredictable and disloyal hotshot as foreign minister seems absurd at first glance," it said.

But it also saw the move as calculated, arguing that "the pressure now rests upon him - and his undoubted ambition - to prove himself".

"Those who thought the shamelessness with which Britain's political class play their power games could not be surpassed were disabused of that notion yesterday," it said.

"Boris Johnson, King of Brexit, has now been rewarded with the post of foreign secretary, having initially stuck his head in the sand after the vote.

"Now, finally, there can be no more doubt that British politics is not concerned with the country's welfare, but with haggling for positions, personal ambitions and power plays."

In its main article from London, Der Spiegel said Mr Johnson "himself seemed surprised", having been widely regarded as "Britain's greatest bogeyman" after the vote.

But it also said Mrs May had appointed him "to heal the party and to show the voters... that she takes the referendum outcome seriously".

France's Liberation reminded its readers that Mr Johnson "has never held a ministerial post and a few days ago he pathetically withdrew from the race to lead the Tory Party".

"What looks like a promotion could in fact be a poisoned chalice," the left-leaning paper said, adding that "the real negotiations on the Brexit will be managed by a specially created ministry and by the prime minister's cabinet".

On social media, writers let rip too, with one tweeting, "A clown as the new foreign minister - comedy or Shakespearean tragedy?" and another proposing that Johnson "recruit Mr Bean as an adviser".