Those are some of the ways that some of Europe's biggest companies have been affected by President Donald Trump's trade war, offering a preview of how tensions in global commerce could begin to ripple through the European economy.

As companies like BMW, Siemens and Volkswagen reported otherwise solid earnings this week, they warned that Trump's aggressive stance on trade presented them with a host of new risks, which already could be acting as a drag on growth.

The president's tariffs have not just raised the costs of materials such as steel, they also have diverted trade worldwide and warped the complex global supply systems that businesses rely on.

In Europe, there are signs of strain, which along with risks ranging from Britain's withdrawal from the European Union to the excessive debt loads of Italy and Greece, are piling pressure on the region's economy.

Beyond the direct effect of Trump's policies, surveys in both the United States and Europe show that businesses are nervous about the fragile détente reached in late July between Trump and the region he had referred to only a few weeks earlier as a "foe".

When managers are afraid, they might cancel or delay investments in new equipment or expansion, hurting companies like Siemens, the German industrial goods giant whose products include technology to operate factories or manage buildings.

Joe Kaeser, the chief executive of Siemens, acknowledged a risk that "all the noise will scare away the confidence of our customers."

"Investment is about trust," Kaeser said on Thursday as Siemens reported a fall in quarterly profit that helped cause the company's shares to slump nearly 5 per cent. It was, he added, about "predictability".

Even though the White House declared a truce with Brussels last week, US tariffs on European steel and aluminium imports remain in effect.

The Continent is also caught in the crossfire of a worsening trade dispute between the United States and China.

European companies could suffer collateral damage in that battle - BMW has already raised prices of SUVs exported to China from its factory in Spartanburg, South Carolina. The German automaker is passing on the added cost from tariffs that China imposed on U.S. products in retaliation for Trump's tariffs on Chinese goods.

If the trade war continues, some companies may begin to move production to avoid paying the levies.

BMW hinted as much on Thursday, saying it could sidestep the tariffs by transferring some car production to China, though the company hasn't done so yet.

"BMW can react very quickly to changes in the market because of our flexible network," Harald Krüger, the chief executive of BMW, said during a conference call with reporters.

Rival German carmaker Volkswagen, which reported a 7-per-cent increase in quarterly profit on Wednesday, also warned that trade tensions could become a drag on sales and profit.

This pessimism is affecting not just major companies, but the European economy broadly.

The eurozone economy is slowing down, and evidence is growing that the trade war - or anxiety about a trade war - is one of the reasons. The currency bloc grew 0.3 per cent in the second quarter of 2018, down from 0.4 per cent in the first quarter, Eurostat, the European statistics agency, said Tuesday.

Eurostat has not yet provided any underlying data to explain the loss of momentum. So far, the direct effects of Trump's steel and aluminium tariffs are limited, Johannes Bahrke, a spokesman for the European Commission, said Thursday.

But, Bahrke said in a statement, "trade protectionism is a serious downside risk for the global economic outlook."

The tariffs that Trump imposed on European steel and aluminum don't amount to a lot of money, relatively speaking. They hit European exports worth about US$8 billion (S$10.9 billion) annually, a substantial sum to be sure, but not enough to knock the economy off course.

So far, corporate profits have not collapsed, but they are not growing very much either. BMW reported a 6 per cent decline in quarterly profit Thursday, which it attributed mostly to increased spending on new technologies such as autonomous driving. Siemens said that profit from April through June fell 14 per cent, in part because of a slowdown in the US auto market.

Gauges of the mood among European businesses, however, show a clear negative trend, one that could have an outsize impact on the regional economy.

And if Europe's economy suffers, so will the United States. Despite all the hostile rhetoric, the European Union and United States remain each other's biggest trading partner.

"In the hard facts, hardly anything has changed," said Carsten Brzeski, chief economist for Germany and Austria at ING Bank. Rather, he said, trade tensions are "a cloud of uncertainty hanging over" Europe.

For example, a survey published Thursday by the Ifo Institute, a Munich-based think tank, showed increasing gloominess among economists who work for European banks, companies, research institutes and government institutions.

US businesses are worried, too. A closely watched barometer of sentiment among U.S. managers dipped to a 12-month low Thursday. Concern about tariffs is "an overwhelming concern," the Institute for Supply Management, which conducted the survey, said Thursday.

There are other forces at work, as well, that are weighing on European growth, such as a stronger euro, which makes products manufactured in the eurozone more expensive in markets abroad. 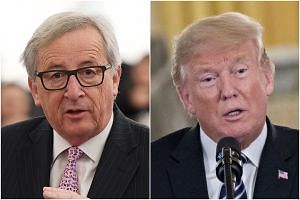 'Where are your manners?' outraged British politicians ask Trump

The damage from trade tensions would be much more substantial if Trump broke the cease-fire he reached in July with Jean-Claude Juncker, the president of the European Commission.

The two leaders agreed to begin talks on an accord that would eliminate tariffs between the United States and the European Union.

They also pledged not to take any measures against each other while the negotiations took place. That would seem at least to postpone moves by Trump to impose 20 per cent tariffs on vehicles imported from Europe, which were worth US$47 billion last year.

But given Trump's history of making nice with foreign leaders one day then blasting them on Twitter the next, there is palpable nervousness about how long the truce will last.

On Tuesday, representatives of Canada, Japan, South Korea and the European Union, all of which have large automobile industries, met in Geneva and discussed the Trump administration's effort to use national security as a justification to slap tariffs on imported vehicles.

The meeting was a sign the auto-making nations continue to gird themselves for a resumption of hostilities, just in case.

Even if Europe manages to stay relatively clear of any dispute over auto imports, its economy would be disrupted by escalating tensions between the United States and China.

Carmakers and other manufacturers depend on complicated supply networks in which components often move across borders and continents multiple times. Both the United States and China are integral players in those networks.

Stable conditions are "of utmost importance." For now, business leaders are hoping the cease-fire holds and negotiations between Brussels and the White House are successful.

"We hope that the talks continue in a constructive way."