BRUSSELS (REUTERS) - The European Union failed on Tuesday (Dec 11) to reach a compromise over how sharply to curb carbon dioxide (CO2) emissions from cars and vans as car-producing countries and more environmentally conscious lawmakers could not find a compromise.

The EU has been divided for months over how strict to be on CO2 emissions from cars and vans. Germany, with the bloc's biggest auto sector, has warned that tough targets could harm industry and cost jobs.

Representatives of lawmakers in the European Parliament of the 28 EU countries have held several rounds of talks together with the European Commission designed to find common ground and ended after six hours early on Tuesday, EU diplomats said.

The EU executive initially proposed that emissions decline by 30 per cent by 2030, compared to 2021 levels.

Germany backed that plan, but a push by several EU countries, including the Netherlands and France, raised the target to 35 per cent. There is also an intermediate target for 2025.

European Parliament lawmakers voted in favour of a 40 per cent reduction in October, drawing howls from the car industry. 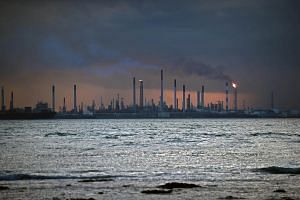 The targets to curb emissions from the transport sector, the only industry in which emissions are still rising, are aimed at helping the bloc reach its goal of reducing greenhouse gas emissions overall by 40 per cent by 2030.

EU countries are separately considering the extent to which truck emissions should be cut.

Extreme temperatures across the northern hemisphere this summer have fuelled concerns climate change is gathering pace, galvanising some EU countries to call for emissions to be cut at a faster rate than planned.

Eight such EU countries, including the Netherlands and Sweden, believe that the emissions cut should be 40 per cent for cars and say there is a clear majority of countries willing to move beyond 35 per cent.

One EU diplomat from a country seeking a more ambitious cut said it appeared that Austria, which holds the EU presidency and is negotiating on behalf of the other EU states, was simply waiting for assent from Germany.

The EU is attending talks billed as the most important UN conference since the Paris 2015 deal on climate change, which have begun a crucial final week in the Polish city of Katowice. The challenge is to agree a rule book to limit global warming.