BRUSSELS (BLOOMBERG) - European Union finance ministers will vote Friday (Aug 2) morning on who should take over the top job at the International Monetary Fund, as the bloc seeks to break an internal deadlock and avoid losing a post that traditionally is held by one of its own.

The vote was delayed until 8 am Brussels time (2pm Singapore time) on Friday to allow Britain to put forward a new candidate in light of the recent change in its government, according to a statement from the French finance ministry and EU officials. There may be several rounds to the ballot, which will be done by qualified majority, which takes into consideration countries' populations.

EU governments have so far failed to rally behind a single candidate to replace Christine Lagarde atop the Washington-based IMF and the frustration has become palpable across capitals. The Washington-based fund will stop accepting applications on Sept 6 and is seeking to complete the process by Oct 4.

Despite the fact that there are five names in the running, Calvino and Centeno are long shots as they are seen as not having the same level of expertise as the other candidates, according to a European official, who asked not to be identified because the deliberations are private.

The French finance ministry said none of the five wished to withdraw their candidacy and all were judged "legitimate and of excellent quality." The top vacancy comes after Lagarde resigned this month to lead the European Central Bank. The IMF's next leader will confront a world economy at its weakest since the aftermath of the financial crisis. Last week, the fund further reduced its global growth outlook, already the lowest since 2009, to a projected 3.2 per cent expansion this year.

Yet Europe has struggled to rally behind a single candidate, with geographic and political considerations deepening the divisions between camps pushing for different hopefuls. Growing frustration over the decision-making process - especially from countries whose nationals are being considered - has weighed on the talks. 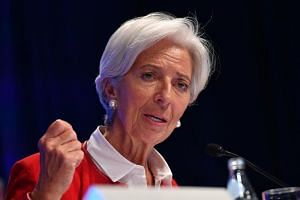 Want to lead the IMF? You have until Sept 6 to apply

There are practical issues, too. If Georgieva gets the EU's nod, the bloc would have to ask for a change in the IMF's bylaws to allow her to take over the post as she will be above the age limit by the time the term starts. Some officials have voiced concerns that this could raise eyebrows among non-European members of the fund, which would be keen to put forward their own qualified candidates who meet such criteria.

Under a half-century-old agreement, the head of the IMF is a European while the US picks the World Bank chief. That tradition prevailed when David Malpass was selected as the World Bank's president in April. But Europeans are uncertain whether US President Donald Trump's administration will return the favour - and emerging markets have been arguing for years that the current arrangement does not reflect a world that's since evolved.