LONDON (REUTERS) - The European Union's chief Brexit negotiator, Mr Michel Barnier, must go back to the bloc's leaders to change the terms of the talks because Britain's Parliament will not accept the current deal, British Brexit minister Stephen Barclay said on Sunday (Aug 4).

Writing in the Mail on Sunday newspaper, Mr Barclay said the"political realities" had changed since Mr Barnier's instructions were set after Britain voted to leave the EU more than three years and that his mandate should reflect those differences.

Britain's new Prime Minister Boris Johnson has pledged to leave the EU on Oct 31 with or without a deal, and has told the bloc there is no point in new talks unless negotiators are willing to drop the so-called Northern Irish backstop agreed with his predecessor Theresa May.

But Mr Barnier has said the EU will not renegotiate the divorce deal, or Withdrawal Agreement, including the backstop, an insurance policy to prevent a return to a hard border between the British province of Northern Ireland and EU member Ireland.

"Mr Barnier needs to urge EU leaders to consider this if they too want an agreement, to enable him to negotiate in a way that finds common ground with the UK. Otherwise, No Deal is coming down the tracks," Mr Barclay wrote in the newspaper.

"It is our firm view that Irish border issues should be dealt with in talks on the future agreement between the UK and the EU - where they should always have been - and we're ready to negotiate in good faith on this basis."

The backstop, which would come into play if a future trading arrangement falls short of keeping the border open, has been the main stumbling block in the Brexit talks and one of the reasons why Britain's Parliament rejected the deal three times. 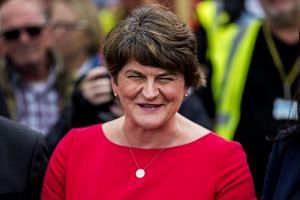 Mr Johnson has vowed to get rid of the backstop and the new government has taken a hard line with the EU, saying it was"turbo-boosting" preparations for a no-deal Brexit if the bloc fails to agree alternative arrangements for the border.

Mr Barclay said officials were working on those arrangements.

"We have already started work across Whitehall to find the solutions, and they can and will be found, in the context of the free trade agreement we will negotiate with the EU after Oct 31," he wrote.