Ethiopia and Eritrea, long-time foes which fought a border war from 1998 to 2000, restored relations in July 2018 after years of hostility.

“Ethiopian Prime Minister Abiy Ahmed Ali has been awarded this year’s Nobel Peace Prize for his efforts to achieve peace and international cooperation, and in particular for his decisive initiative to resolve the border conflict with neighbouring Eritrea,” the Norwegian Nobel Committee said in its citation.

"The prize is also meant to recognise all the stakeholders working for peace and reconciliation in Ethiopia and in the East and Northeast African regions," the Nobel committee added.

At 43, Abiy Ahmed is the youngest head of government in Africa.

“This victory and recognition is a collective win for all Ethiopians, and a call to strengthen our resolve in making Ethiopia – the new horizon of hope – a prosperous nation for all,” the prime minister’s office said.

It said he has also initiated "important reforms that give many citizens hope for a better life and a brighter future".  It quoted Abiy as saying: “We are proud as a nation.”

Mr Ahmed said he was “humbled and thrilled” upon learning he was the 2019 Nobel Peace Prize laureate, adding he hoped it would inspire peace efforts on his continent.

“I was so humbled and thrilled when I just heard the news,” Mr Abiy told the Nobel committee in a phone call posted online on the Nobel Prize website, saying: “It is a prize given to Africa, given to Ethiopia”.

Mr Abiy also said he could “imagine how the rest of Africa’s leaders would think it possible to work on peace-building processes”.

The Norwegian Nobel Committee believes it is now that Abiy Ahmed’s efforts deserve recognition and need encouragement. The committee hopes that the 2019 #NobelPeacePrize will strengthen Prime Minister Abiy in his important work for peace and reconciliation.#NobelPrize

In close cooperation with Isaias Afwerki, the President of Eritrea, this year’s Peace Laureate Abiy Ahmed quickly worked out the principles of a peace agreement to end the long “no peace, no war” stalemate between Ethiopia and Eritrea.#NobelPrize #NobelPeacePrize

CHALLENGES AHEAD FOR ABIY

Since taking office in April 2018 after the resignation of Hailemariam Desalegn following three years of street unrest, Abiy has announced a series of reforms that hold the promise of fundamentally changing the country of some 100 million people.

From partial liberalisation of the state-controlled economy to overhauling the security forces that have helped the ruling coalition maintain a tight grip on power since 1991, the promises have raised hopes in the country and abroad. 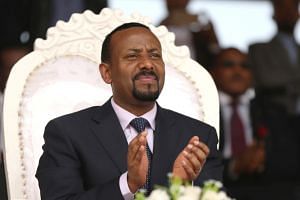 Ethiopian PM Abiy Ahmed hands half of Cabinet to women, including defence job

Ethiopia's 2020 vote will be free, won't be delayed by reforms, says PM

What remains to be seen is whether Abiy – who joined the Ethiopian army in his teens and rose through the ruling Ethiopian People’s Revolutionary Democratic Front (EPRDF) coalition over the past two decades – can reshape Ethiopia and open it up to the world from within the current system.

He faces challenges including resistance to change from vested interests within his coalition, and the possibility that violence, including in June when a rogue state militia leader killed the region’s state president and other top level officials, could escalate.

Introduced by Swedish chemist and innovator Alfred Nobel, who made a vast fortune from his invention of dynamite in 1866, the Nobel prizes were first awarded in 1901 to honour "those who, during the preceding year, shall have conferred the greatest benefit on mankind".

Earlier this week, the Nobel prizes in the fields of medicine, physics, chemistry and literature were awarded.

The economics prize - the only award not included in Nobel's will, wraps up the 2019 Nobel prize season on Oct 14. It was funded and created by the Swedish Central Bank to mark its 300th anniversary in 1968.

All the Nobel winners will be presented with their prizes on Dec 10, on the anniversary of Nobel's death.