LONDON (REUTERS) - England is set to run out of water in 25 years due to population growth, poor water management and climate change, the head of the country's environment body said on Tuesday (March 19).

Sir James Bevan, chief executive of the Environment Agency, said England will be caught in the "jaws of death" and face severe shortages unless attitudes changed and wastage was cut.

"The jaws of death (is) the point at which, unless we take action to change things, we will not have enough water to supply our needs," Mr Bevan told a London water conference.

"We need water wastage to be as socially unacceptable as blowing smoke in the face of a baby or throwing your plastic bags into the sea. We need everyone to take responsibility for their own water usage."

Water scarcity already affects more than 40 per cent of the world's population and is expected to rise due to climate change, with one in four people projected to face chronic or recurring shortages by 2050, according to the United Nations.

The warning comes ahead of World Water Day on Friday, as a growing number of governments - from Brazil to South Africa and Australia - grapple with fears that taps will run dry, making it hard for people to cook, wash, grow food or run businesses.

Mr Bevan said some of Britain's rivers will halve in volume by 2050, causing water deficits in many parts of the country, particularly the heavily-populated south-east. 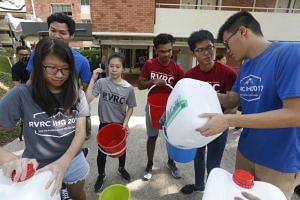 Climate of change: Pumping up efforts to avert water shortage in India

Severe water shortages around the world: Why the taps run dry

An average person in England uses 140 litres of water a day and usage is expected to rise, with the population set to hit 75 million in 2050, up from 67 million today, the Environment Agency said in its first major report in 2018 on water resources.

About three billion litres of water in England is wasted every day through leakages - the equivalent to that used by over 20 million people, it said.

Mr Bevan said if each person reduced their water usage to 100 litres a day by 2050, there would be enough water for an additional 20 million people in the country.

This is twice the amount that residents of South Africa's drought-stricken Cape Town were allowed to use each day last year.

"The fact is that we won't have long term water security unless all of us change our behaviour. We all need to use less water and use it more efficiently," Mr Bevan said.