THE HAGUE (AFP) - Climate marchers handed in a lawsuit to Shell's headquarters in the Netherlands on Friday (April 5) aimed at forcing the oil giant to meet targets in the Paris accord.

Dozens of chanting activists went to the Anglo-Dutch firm's base in The Hague, where they delivered a legal summons with a court date set for April 17.

Shell greeted the protesters with coffee from an electric drinks van. It said that while it "shares concerns about the climate" it "believes in a solution outside the courtroom".

"We are taking Shell to court because it's not keeping to the aims of the Paris climate agreement. This way we are trying to prevent huge damage."

Environmental groups say 17,200 people have registered as co-complainants in the case, which Cox said would be the first of its kind.

Other groups involved in the case include ActionAid Netherlands, Both Ends, Fossielvrij NL, Greenpeace NL and Young Friends of the Earth NL.

The protesters carried banners with slogans such as "We Shell overcome - eventually" and red posters saying "Shell is as green as this poster." 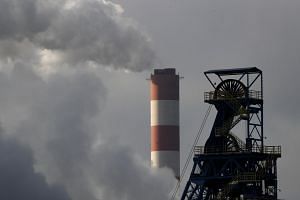 They also mounted a giant version of the summmons with the signatures of the thousands of plaintiffs at Shell's headquarters near the city centre.

Shell Netherlands CEO Marjan van Loon addressed the protesters outside the building, saying that fighting climate change was a "team sport", the company said in a Twitter post with a photo.

"I would like to answer every finger, whether it is a index finger or a middle finger, with an outstretched hand," it quoted her as saying.

In a summary of the 250-page document handed over to Shell, the groups said that under Dutch law Shell was unlawfully endangering peoples' lives by not acting to prevent global warming.

"Internal and external documents show that Shell has known about climate change at least since the 1950s and has been aware of its large-scale and serious consequences at least since 1986," it said.

"Although Shell knew, it has not taken any serious steps to minimise its share in climate change," the document added.

Cox said that unlike previous cases which sought financial compensation for the effects of climate change, this one involves asking the judge to order Shell to ensure its activities have zero per cent carbon dioxide emissions by 2050.

Shell is responsible for 1.7 per cent of all greenhouse gas emissions between 1988-2015, according to a peer-reviewed study of the 100 most polluting companies released two years ago.

It is also among five oil and gas majors that have spent more than US$1 billion (S$1.35 billion) on lobbying against climate legislation since the Paris deal.

Shell's plans for tackling climate change are "not consistent with the Paris goals", said Harjeet Singh, who heads global climate activities at ActionAid.

"We need to expose Shell on this and in fact what it has been doing all this while is hiding and distorting facts and lobbying against climate policy," Singh told AFP.

Climate change is a pressing issue in the Netherlands, where at least a third of the country lies below sea level.

The Dutch government was ordered by a court last year to slash greenhouse gases by at least 25 per cent by 2020, following a legal challenge by another environmental group.

Thousands of Dutch students have rallied in Amsterdam and The Hague in recent weeks, urging the government to take action, with Dutch Prime Minister Mark Rutte meeting the group's leaders.