LONDON (AP) - Emergency workers raced on Saturday (Aug 3) to lower water levels behind a damaged dam in northwest England as forecasters warned more bad weather is on the way.

Pumps have reduced the water level in Toddbrook Reservoir by half a meter since Thursday, but authorities warn that pressure on the 180-year-old dam remains severe.

A Royal Air Force helicopter continued precision drops of sandbags into a gaping hole on the dam, while specialist contractors placed concrete grouting around the bags to bind them together.

Images from the operation showed personnel hanging out of the side of the Chinook, directing the bags into the hole to fill gaps - like a craftsman smoothing plaster.

Hundreds of one-ton bags had been dropped in the last few days, said Daniel Greenhalgh of the Canal & River Trust, which manages the dam.

"This is still a critical situation," Greenhalgh told the BBC. "We need to draw the water down significantly."

The dam was damaged last week after heavy rains sent torrents of water rushing over its spillway. Britain's meteorological office is warning of further rain on Sunday, with the risk of floods and lightning strikes. 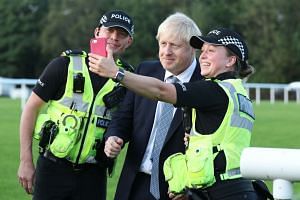 Firefighters have brought in large pumps to pull water out of the reservoir and into the River Goyt.

Emergency crews are now pumping five metric tonnes of water per minute, while inlets into the reservoir are also being dammed off to block any floodwaters from Sunday's promised rain.

"We are hoping the weather will be kind to us," Derbyshire Deputy Chief Fire Officer Gavin Tomlinson said. "But everyone is working as hard as possible to get ahead of the curve and remove as much water as possible today, overnight and into tomorrow, to minimize the impact of any bad weather that does materialise."

More than 1,000 people were evacuated from the town of Whaley Bridge, about 280km north of London. The government says it may be several days before residents can return to their homes permanently, but allowed one family member per household to return home for 15 minutes to collect essentials or treasured items.

Among the residents going home quickly was Tracey Coleman, who lives just outside the area marked for closure. She left in haste with her family on Thursday, taking two dogs, a cat, a tortoise and a neighbour's dog.

"We just took some medication, the animals and a bit of food," she said.

Coleman said she had been walking in the park Thursday morning when she heard what she thought was thunder.

"Now I think I must have heard the dam breaking," she said.