SINGAPORE - British technology firm Dyson has been hit by a public backlash over its decision to move its headquarters to Singapore, with many in Britain labelling its billionaire founder James Dyson a hypocrite.

Mr Dyson was one of the prominent voices from the business world who supported the campaign for Britain to leave the European Union, arguing that the country would benefit from being outside the bloc.

Though he stated that the decision announced on Tuesday (Jan 22) was not related to Brexit, a number of politicians and ordinary citizens slammed him for "betrayal of the public".

Many noted that the move comes in the wake of Singapore signing a free trade deal with the EU, whereas Britain's post-Brexit trading relationship with the EU remains unclear.

"Dyson's decision to move his HQ to Singapore reflects his narrow business interest. This is not just a transfer of two people. When HQs move, so does the intellectual property. Betrayal of the public who put their faith in him as a British business advocating a No Deal Brexit," he wrote.

Labour lawmaker Wes Streeting accused Mr Dyson of "rank hypocrisy" on Twitter, alleging that he has "no sense of responsibility to his workers or to his country".

Dyson called for and funded a No Deal Brexit, which would hit the least well-off the hardest. They can’t just upsticks and move to Singapore. https://t.co/dTeNtY5PeL

The rank hypocrisy of James Dyson. No sense of responsibility to his workers or to his country. https://t.co/2AFvtNBbR6

Mr Jason Beattie, the head of campaigns at the Daily Mirror, noted: "Dyson group paid £155m in tax in the UK in 2017 and £388m in 2016. Money which could fund schools, hospitals and universities now going to Singapore treasury."

Mr Tom Kibasi, the director of the Institute for Public Policy Research, wrote on Twitter: "James Dyson's lack of social obligation is an utter disgrace. His business succeeded because of this country. Complete absence of gratitude to workers, taxpayers, innovators, creators. Shameful."

A large number of users urged Britons to boycott Dyson products over the decision. 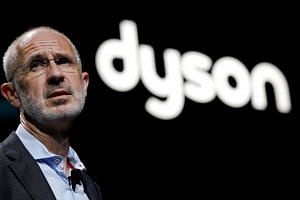 "Does anyone else feel like they've been mugged off, or is it just me? There was #Dyson making out that #Brexit would be great, next thing we know he mumbles about 'future-proofing' his business, & scuttles off. Let's hope #British consumers have long memories, Mr Dyson," wrote @riceytravels.

Others called for Mr Dyson to return his knighthood or for it to be rescinded.

Dyson moves HQ to Singapore: 5 things about the British home appliance giant and its billionaire founder

Dr Jennifer Cassidy, a politics lecturer at Oxford University, tweeted: "The wealthy like James Dyson belong to a Britain that, for most, simply doesn't exist. They speak of freedom, of sovereignty, of borders. But for so many, freedom is having food on the table, a roof over your head and safety for your family. This is something they will never know."

Despite the majority of voices on social media attacking the decision to relocate, there was some support for the company.

"Dyson hasn't 'deserted' Britain... two senior executives are moving to Singapore and there's no impact on UK production or research and development. This is pretty desperate stuff from the Remain lot. If anything it's a sign that the UK must become more competitive!" wrote Twitter user @darrengrimes_.