THE HAGUE (AFP) - Dutch investigators said on Friday (Sept 28) they found a large quantity of bomb-making materials including fertiliser likely to be used in a car bomb following the arrest of seven terror suspects.

The seven were seized on Thursday in the cities of Arnhem and Weert by elite Dutch anti-terror units and are suspected of wanting to carry out a "major" attack in the country.

They briefly appeared for the first time in the Rotterdam District court on Friday on terror-related charges, where their case was remanded until next week.

The men, who range from 21 to 34 years, were not named and will remain under maximum security conditions - which means they are only allowed to talk to their lawyers.

During Thursday's search "police confiscated a substantial amount of raw materials to make bombs at the suspects' homes," the Dutch public prosecution service said on Friday.

Officers also found "100 kilogrammes of fertiliser, possibly for use in a car bomb," the prosecutors added in a statement.

Officers had previously placed a group of people under surveillance, including a 34-year-old Dutch man of Iraqi origin who was convicted in 2017 of attempting to reach territory controlled by the militant Islamic State in Iraq and Syria group. 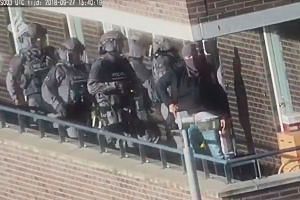 The suspects came from Arnhem, the port city of Rotterdam and villages close to those two cities. Two others in the group also had convictions related to attempts to travel to Iraq or Syria.

The men are suspected of wanting to attack civilians at a major event in the Netherlands, the Dutch secret service (AIVD) said, but a possible target was not named.

Dutch Prime Minister Mark Rutte during his weekly press conference told journalists “a drama has been prevented in our country”.

“These arrests show how important it is to remain vigilant,” Rutte said, adding it meant the chances of a terror attack in the Netherlands “remained a reality”.

The Netherlands has been largely spared the kind of terror attacks which have rocked its closest European neighbours in the past few years, but there has been a series of recent scares.

Thursday's arrests came three months after two men were arrested in Rotterdam on suspicion of preparing attacks in France and the Netherlands.

The arrests also come a month after a 19-year-old Afghan with a German residence permit stabbed and injured two American tourists at Amsterdam's busy Central Station before being shot and wounded.

The likelihood of a terror attack in the Netherlands "remained substantial", the Dutch anti-terror agency NCTV said last week, with terror threat levels remaining at level four out of five.