LONDON (THOMSON REUTERS FOUNDATION) - Half of British women find the word housewife outdated, sexist or embarrassing, a survey said on Thursday (Aug 2), as pressure mounts for greater equality at home and at work.

Most women in Britain cannot do old-fashioned tasks, like darning and knitting, and instead see a good career, financial security and being tech-savvy as key accomplishments, found a survey by My Nametags, which manufactures iron-on labels.

"There was a strong sense that, although many traditional skills are falling out of favour, these have been replaced with equally important know-hows," Lars Andersen, managing director of My Nametags, said in a statement. 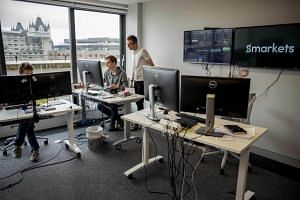 "Until it becomes the norm for all genders to take on these roles in equal numbers, 'housewife' will remain a 'dirty word', rather than just an outdated one."

More than three-quarters of 2,000 women surveyed said expectations of their role had changed over a generation. Nearly half said they are more fulfilled than their own mother was.

Another survey this month found that nearly three-quarters of Britons do not believe a woman's place is in the home - although that consensus fell away if she had a young child.