KATOWICE, Poland - United Nations climate change talks in Poland have reached a "watershed moment", observers say, with discussions over the next few days being pivotal in determining how robust the global action plan for climate change will be.

Ministers from almost 200 nations are in the Polish city of Katowice for the second week of COP24, as the UN talks are called, marking the transition between the technical negotiations that took place over the first week of talks, and the political phase, where the trade-offs between climate policy and political objectives are assessed.

Observers The Straits Times spoke to said a deal is likely by the end of this week. But how useful this outcome will be in helping countries step up efforts to cut emissions and curb the pace of global warming hinges upon ministerial discussions over the next few days.

Hundreds of pages of text, the basis of the emerging deal, have been whittled down but there are still several contentious areas that only ministers or national leaders can resolve.

As Mr Li Shuo, senior global policy adviser for international environmental group Greenpeace, said: "There will definitely be a piece of cheese. But how many holes are in it remains to be seen."

The climate talks in Katowice aim to agree on a set of rules, or rulebook, that will allow the 2015 Paris Agreement - a framework for keeping global warming to well below 2 deg C that was drawn up during COP21 - to go into force by 2020. Nations were set a three-year deadline to agree on the complex set of rules.

A key part of the Paris pact is that countries should progressively ramp up their efforts to cut emissions, with their national climate plans regularly reported and scrutinised.

But there has been widespread concern that the Poland talks lack ambition and that some countries are trying to weaken progress, despite a series of weather disasters and scientific reports underscoring the urgency to cut planet-warming greenhouse gas emissions that are fuelling more damaging storms, droughts, floods and deadlier heatwaves. 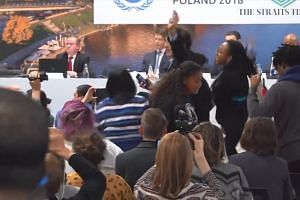 Mr Li said he senses a general mood of complacency among delegates gathered at this year's meeting, especially with the success of COP21 in the rearview mirror. He told The Straits Times: "Many countries seem to think that they are just here to develop the rulebook. The quality of the rulebook, however, is of secondary priority to them."

As part of ramping up ambition under the Paris Agreement, nations have a mandate to review and enhance their climate targets before 2020. Said Mr Li: "But many countries are not taking that mandate seriously. And the concern is that as a result, we won't have a very ambitious signal to ramp up ambitions."

A few sticking points - or "crunchy points", as the Polish president for COP24 Michal Kurtyka has referred to them - have hampered progress.

One contentious point is on the issue of transparency and reporting of emissions data, said Ms Melissa Low, a research fellow at the Energy Studies Institute at the National University of Singapore, who is taking part in COP24.

Currently, developed and developing countries have different arrangements for the measurement, reporting and verification of emissions data.

Under the Paris Agreement, however, the distinction between developing and developed nations was blurred, as countries agreed that climate change was a global issue and one that required all hands on deck. This meant that all countries would be subject to the same requirements in terms of transparency and reporting of emissions data, although the Paris Agreement also allowed for some flexibility.

During the ongoing talks in Katowice, nations are struggling to hammer out the details on which countries could be granted this flexibility.

"But this is a sticking point, as some countries are suggesting that granting flexibility to some countries is an excuse to continue maintaining the bifurcation between developed and developing countries," said Ms Low.

Bifurcation, though, has long plagued the talks, which took more than 20 years of effort to reach the Paris Agreement. Rich nations have long maintained that big developing nations need to do more to cut their rapidly growing emissions, while poor countries say wealthy states should cough up more climate cash to help them green their economies and adapt to the impacts of climate change.

Another issue that observers are calling attention to is that of loss and damage, or how countries affected by climate change should be compensated.

Mr Harjeet Singh, global lead on climate change at international non-governmental organisation ActionAid International, said during a press conference on Wednesday (Dec 12) that loss and damage should be an "integral part of the rulebook", and not be relegated to the sidelines.

He said: "Let us understand that the Paris Agreement is not about solar panels or wind farms, it's about people. It's about the planet. If we are going to assess the Agreement without people, and how impacts are being addressed by countries and by the global system, we will fail in our responsibility in implementing it."