Torrential downpours also soaked northern Italy, sweeping away part of a motorway viaduct and leaving one woman missing, the latest in a two-week wave of extreme weather in the area.

Venice was again plunged under water after damaging flooding earlier this month.

In France, two people died and at least one was missing as high floodwaters sank cars underwater and turned roads into rivers.

One body was found in the village of Le Muy, just north of France's Mediterranean coast, local officials in the southern Var region said.

It was found near where a rescue dinghy carrying three members of the fire brigade and three civilians had capsized last Saturday, with one of the civilians subsequently reported missing.

The second body, of a man in his 50s, was found in the village of Cabasse in a car, the local authorities said, without giving further details.

Another man, in his 70s, was still missing in the village of Saint-Antonin-du-Var after going out during the night amid heavy rain. 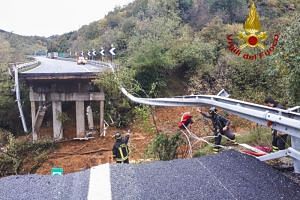 Heavy snow leaves one dead, 300,000 homes without power in France

Who is to blame if Venice goes underwater?

The south-east regions of Alpes-Maritimes and Var have, since last Friday, been hit by torrential rainstorms that also caused huge waves in seaside areas.

A 39-year-old woman was badly injured last Saturday and hospitalised after being swept away by a wave, the fire service said.

The town of Roquebrune-sur-Argens in the Var region was particularly badly affected and accessible only by boat or helicopter, the local authorities said.

Some 4,500 households have been left without electricity throughout the two regions.

In Italy, part of a viaduct serving the A6 motorway near Savona in the northern region of Liguria running between Turin and France was washed away by what appeared to be a mudslide, leaving a 30m gap in the road.

Although the emergency services did not immediately find any victims at the site, sniffer dogs and helicopters were checking the area to make sure.

But pictures of the damage brought back memories of the 2018 collapse of the Morandi bridge at Genoa, only 50km away, which claimed 43 lives.

In the Piedmont region, a 52-year-old woman was missing after her car was swept away when a river burst its banks. Local media reported that two other people in the car managed to get out of the car in time.

The worst hit region in Italy was Alessandria, south of Turin, where 200 people were evacuated and 600 left isolated. One woman was reported missing, Italian media said.

Another 500 people were evacuated further north in the Aosta Valley, where roads were closed because of the risk of avalanches.

On the east coast, Venice was again hit by the floods that have paralysed the city over the last days, even if the levels were well off the historic peak reached on Nov 12.

The waters that flooded St Mark's Square in the city centre were at knee height, and were beginning to recede by the afternoon.

Venice's mayor has said the damage of the flooding earlier in the month could amount to €1 million, blaming the near-record water level rise on climate change.

The latest floods came as environmental activists staged a demonstration protesting the city's inadequate flood protection programme and calling for an end to the massive cruise ships that visit the historic city.

The senior official for the Var region, Mr Jean-Luc Videlaine, told AFP that the rains had been of "historic" intensity, adding that the damage would be "considerable".

Although water levels were now going down, he added that the situation was "far from returning to normal".

In some areas of the Var region, the equivalent of two or three months of rain fell in just 24 or 48 hours.