COPENHAGEN (AFP) - A Danish appeals court on Wednesday (Sept 26) upheld killer Peter Madsen's life sentence for the 2017 murder of a journalist aboard his homemade submarine.

Madsen, 47, had asked the Copenhagen appeals court to reduce the sentence but did not contest his conviction for the murder of 30-year-old Swede Kim Wall.

Madsen's lawyer Betina Hald Engmark, who had asked for the sentence to be shortened to between 14 and 16 years, said she and her client would study Wednesday's ruling before deciding whether to appeal it to the Supreme Court.

Madsen has insisted Wall's death was an accident, but admitted to chopping up her corpse and throwing her body parts into the sea in August 2017.

He had argued that life behind bars was "disproportionate".

Life sentences are rarely handed down for a single killing in Denmark. In the past 10 years, only three people have received such sentences.

A life sentence in Denmark averages around 16 years. Twenty-five inmates are currently serving life behind bars in the country. 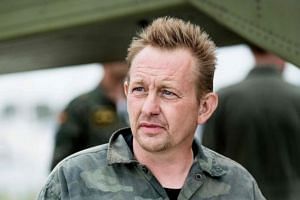 The court, which was unanimous in its decision, said the life sentence, handed down in April, was justified because of the "unusual brutality" and the "aggravating circumstances", noting the crime was "meticulously planned".

"There is no punishment that is too harsh for this man," prosecutor Kristian Kirk told reporters after the ruling.

On Aug 10, 2017, Wall, an award-winning reporter, boarded the submarine with Madsen, an eccentric, self-taught engineer and a minor celebrity in Denmark, to interview him for an article she was writing.

Wall's boyfriend reported her missing when she failed to return home that night.

Her dismembered body parts were later found on the seabed, weighted down in plastic bags.

Asked Wednesday if he had any final remarks, Madsen reiterated what he told the lower court: "Nothing. Except that I am terribly sorry for Kim's loved ones for what happened."

His lawyer has previously said the remark should not be interpreted as an admission of guilt.

Madsen changed his version of events several times since his arrest in August 2017, but ultimately testified that Wall died when the air pressure suddenly dropped and toxic fumes filled his vessel while he was up on deck.

An autopsy report concluded that she probably died as a result of suffocation or having her throat slit, but the decomposed state of her body meant examiners could not determine an exact cause of death.

Fourteen stab wounds and piercings were also found in and around her genital area.

Madsen said he stabbed her because he wanted to prevent gases from building up inside her torso that would prevent it from sinking to the seabed.

The prosecution said Madsen killed Wall as part of a macabre sexual fantasy, showing the lower court videos found on his computer of women being tortured, beheaded, impaled, and hanged.

And on the night before Wall boarded his vessel, Madsen googled "beheaded girl agony", which Madsen tried to claim was "pure coincidence".

Psychiatric experts who evaluated Madsen - who described himself to friends as "a psychopath, but a loving one" - found him to be "a pathological liar" who poses "a danger to others" and who was likely to be a repeat offender.

Inmates with life sentences in Denmark can ask to be paroled after 12 years, but the justice system can decide to keep him or her behind bars as long as he or she is considered a danger to society.