Italian Prime Minister Giuseppe Conte, whose country has reported the most virus-linked deaths worldwide, is leaning towards an extension to early May, with few concessions to business demands to allow more companies to operate normally.

Spain prolonged a state of emergency until April 25 and Britain also is likely to extend restrictions.

German Chancellor Angela Merkel joined Spain and Italy on Thursday (April 9) in upholding restrictions on people's movement and face-to-face contacts, saying progress in defeating the pandemic is "fragile" and it's too early to relent.

In a plea echoed elsewhere in Europe, she called on Germans to abide by the measures over the long Easter weekend.

"We must stay focused," she said after a cabinet meeting.

As the pandemic maintains its grip on Europe, policy makers are caught between the urgent need to restart battered economies and calls by health officials to maintain lockdowns.

Political uncertainty in Britain eased after Prime Minister Boris Johnson was released from intensive care, though he remained hospitalised to recover from a coronavirus infection.

Italy reported a rise in deaths and infections, while France's death toll increased with a backlog of data from nursing homes.

British deaths, though lower than in Europe's worst-hit countries, rose by 881 to almost 8,000.

"We're not done yet, we must keep going," Foreign Minister Dominic Raab, who is deputising for Johnson, said in London.

"Deaths are still rising, and we still haven't seen the peak of the virus."

Italy's containment measures, which include a ban on non-essential economic activity and the closing of most shops, run until Monday.

Conte is inclined to keep those restrictions fundamentally unchanged, according to three trade union and business representatives who met with him on Thursday.

With expanded testing under way, Italy recorded a second straight increase in the number of daily new coronavirus cases, counting 4,204 confirmed infections compared to 3,836 on Wednesday.

Another 610 patients died, bringing the death toll to 18,279, according to civil protection authorities.

Infections in Spain rose to more than 150,000 and deaths surpassed 15,000, underscoring the severity of Europe's most extensive outbreak, even as daily figures declined.

Spanish lawmakers extended a national state of emergency for a second time on Thursday as the opposition People's Party joined Prime Minister Pedro Sanchez's coalition government in supporting the measure. 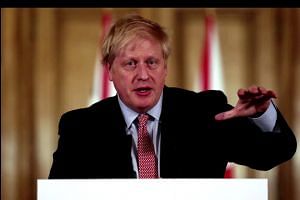 His government's poll ratings have declined as the virus ravaged Spain's health system. The People's Party backed the extension out of a sense of duty to the country, not because Sanchez has any "moral authority," party leader Pablo Casado said.

France reported 1,341 new deaths from the coronavirus after including two days of data from nursing homes, while the number of intensive-care patients declined for the first time since the outbreak began.

"So we can hope for a leveling off, but it's a very high levelling off," Jerome Salomon, head France's public health agency, said at a briefing.

"It remains to be confirmed in the days ahead."

New cases in Germany climbed the most in five days, according to figures Thursday from Johns Hopkins University.

Merkel and the premiers of Germany's 16 states plan to meet on Wednesday to consider next steps.

"I would really love to be the first one to say to you that everything is how it was and we can get things going again," Merkel said on Thursday.

"But that's not the case. My job right now is to say what is happening now."