BERGAMO, ITALY (AFP) – An overwhelmed Italian city at the heart of the coronavirus pandemic on Thursday (March 26) sent more of its dead to nearby towns for cremation as the country’s world-leading toll topped 8,000.

Officials in Rome reported 662 new deaths and 6,153 infections – largely in line with the figures reported throughout the week.

The rise in daily deaths edged down to the lowest point in the crisis – 8.8 per cent – while the infection rate stood at around 8 per cent for the fourth day running.

But the numbers are not dropping much further and Italians appear to be coming to terms with the realisation that two weeks of life under lockdown have not made the disease go away.

“Until we see this damn rate drop, we will have to continue making very hard sacrifices,” deputy civil protection service chief Agostino Miozzo said in reference to the ever-tightening containment measures.

Italy’s coronavirus death toll now stands at 8,165 – more than that of second-placed Spain and China, where the virus emerged in December, combined.

‘CREMATORIUMS COULD NOT COPE’

The endless flood of victims forced the city of Bergamo at Italy’s northern epicentre of the pandemic to send still more bodies to less burdened crematoriums in neighbouring towns.

“The large number of victims has meant that Bergamo’s crematorium could not cope on its own,” mayor Giorgio Gori said in a statement released to AFP.

The mayor said the city had also received 113 urns with the ashes of bodies that had been sent out for cremation earlier this week.

The bodies in the city of about 120,000 people are literally piling up.

A warehouse in the commune of Ponte San Pietro on Bergamo’s western outskirts held 35 freshly-made wooden coffins Thursday that were destined for cremation at a later date.

A priest said a quiet prayer over the rows of coffins and a single red rose rested atop one in the otherwise empty room.

Yet the Italian government is just as anxious about the northern crisis spilling over into the far less developed south.

The head of the Campania region that includes Naples warned of a “dramatic explosion” of infections based on this week’s trends.

“The next 10 days will be hell for us,” governor Vincenzo De Luca said in an open letter to Prime Minister Giuseppe Conte.

The number of officially registered deaths in Campania – Italy’s third-most-populous with nearly six million people – rose from 29 on Sunday to 83 on Thursday.

But no southern region has recorded more than 100 coronavirus fatalities to date.

Italy’s latest figures confirm that Covid-19 overwhelmingly kills the elderly and the sick. 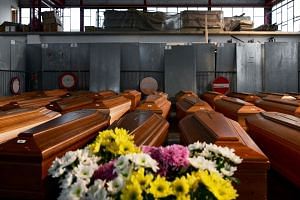 Data from Italy’s first 5,542 fatalities show that 98.6 percent of the victims already suffered from at least one ailment or pre-existing condition.

Slightly over half had three or more other health problems when they died.

Only 29.1 percent of the victims were women. The disparity has been observed elsewhere and still puzzles doctors around the world.

The average age of victims was 78 – a fraction lower than the 78.8 reported last week based on the first 3,200 deaths.

But Italian virologist Roberto Burioni said the figures were “not particularly reliable” because the country was primarily testing people who already exhibited flu-like symptoms.

Italy’s death rate among the confirmed Covid-19 cases – 10.1 per cent – was thus much higher than in countries with broad-based testing such as South Korea..