PARIS (AFP) - It's the key that opens to door from total lockdown: serologic testing, which will show definitively who has contracted Covid-19 and is in theory safe to return to work.

He said that the global research community was focusing on ways of perfecting the tests, which measure viral antibodies in a person's blood that signal immunity.

Veran said that mass production of the tests could start within weeks.

"It's a huge factor, especially when we're trying to reduce confinement," he said.

The World Health Organisation said that serologic tests were still being developed but were yet to be properly evaluated.

Current diagnostic tests, known as RT-PCR, are invasive and use genetic analysis to see if a person is actively infected.

Serologic testing, which only requires a drop of blood to conduct, focuses instead on finding virus antibodies, the presence of which indicates that an individual has had Covid-19 and is now likely immune.

"Antibodies are one of the key immune response components. They start to be detectable around a week after initial infection," said Andrew Preston, a reader in Microbial Pathogenesis at the University of Bath.

There are two types of antibodies associated with the Covid-19 immune response: IgM, which the body produces in the early stages of viral response, and IgG, which arrive later on during infection.

The tests being developed can identify both antibodies, key hallmarks of a patient's auto-immune response to the virus.

"Thus there is great interest in the use of an antibody test to indicate immunity against disease for use in the lifting of lockdown restrictions," said Preston.

Antibody testing is so crucial because of the large proportion of people with Covid-19 infections who may not show symptoms but can still pass the virus on to others.

Such tests already exist for other illnesses. And once they are perfected for the novel coronavirus the results can be analysed in labs using existing hardware.

Once widely available, they could be used to determine who gets to return to work and exit the lockdown currently being experienced by billions around the world.

"The main question is how to ensure everyone can return to work," Francois Blanchecotte, president of the French Union of Biologists, told AFP.

In Italy, the president of the Venice region Luca Zaia, has proposed that returning workers carry a document after testing to prove they aren't contagious.

Similar measures have been proposed in Germany.

"A GP told me yesterday that if I gave him a serologic test and it showed that he's immune, he would offer his services to a neighbouring hospital's Covid-19 unit in an flash," said Philippe Herent, director of the Synlab Opale group of laboritories. 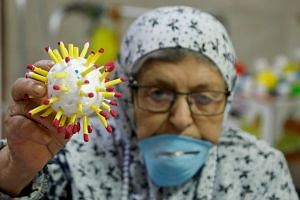 Coronavirus: Global cases surpass 1 million, with more than 51,000 deaths and half of humanity in confinement

He however cautioned that global demand for the tests is likely to significantly outstrip demand, and production remains limited.

The tests aren't the perfect solution, however.

"They have to be used carefully. Used too early, the convalescent patient may still be carrying and shedding the virus, they may still be a risk to others," said Michael Skinner, a reader in Virology at Imperial College London.

It's due to this risk that countries are likely to continue producing and using RT-PCR tests and combine them with the serological versions.

"You might see a mix of the two: one diagnosis to see if you're still contagious and a serological test to know if you have antibodies," said Blanchecotte.

Another potential pitfall is that it not yet known for certain whether people who have recovered from Covid-19 are immune to reinfection.

"In a vast majority of infectious diseases, recovery from disease and evidence of a strong immune response would lead to a period of immunity from re-occurrence," said Preston.

"(But) the caveat is that we don't know for sure that a positive antibody test does imply someone is immune (from Covid-19)."

Most countries in lockdown still lack testing capacity, so it is not at all clear when restrictions on movement could be lifted, even with a widely available antibody test.

But serologic tests are the only way to know for sure what percentage of humanity has been infected with Covid-19, which will help inform a variety of current unknowns, not least mortality rates.

S'pore suspends dining in, tightens Covid-19 curbs: What you need to know