PARIS (AFP) - Families forced to stay away from their loved ones' funerals, mourners fined for following a hearse, and undertakers setting up live links to burials because no one is allowed at the graveside.

This is the new way of dealing with death as Europe struggles to cope with the coronavirus.

Across the continent, grieving families are having to cope with the additional trauma of draconian restrictions to stop the spread of the epidemic.

In France, children have been banned from the bedsides of their dying parents for fear of bringing the virus into nursing homes.

Mourners at funerals have also been ordered not to hug.

And in Italy, particularly in the worst-hit Bergamo province, coffins are piling up because undertakers have been overwhelmed.

Some of the dead in the northern region are even being left sealed in the rooms they died in because there isn't enough coffins.

Such is the death toll in the city of Bergamo itself, that hearses had to wait in line in front of a cemetery's closed gates on Wednesday (March 18).

With funeral services suspended, the city's mayor Giorgio Gori said that "we had to close the cemetery so people wouldn't take the bus there for a final farewell to their loved ones."

With such numbers, and only a quick blessing now being given to the deceased, Gori said had "reopened the (cemetery) chapel so we can store the coffins."

And in Sicily, 48 people were fined for breaking the lockdown to join a funeral procession.

Spain has postponed formal funerals and wakes for coronavirus victims in the worst affected areas of Madrid and Barcelona.

Elena Guijarro, a 25-year-old physiotherapist from the capital, has been forced to bury her father while her mother and brother are still ill in hospital being with the virus.

"My 60-year-old father died yesterday due to coronavirus," she said to Agence France-Presse. "We bury him today... (but) we are not allowed to hold a vigil.

"Just four or five people will attend" the funeral, she added.

"It broke our hearts, but my sister and I had to give up going to the funeral," Parisian Emmanuelle Caradec told AFP, after her grandmother died in Nantes, 400 kilometres to the west.

As well as travel bans, France has limited the number of people allowed to attend funerals to just 20.

Even more stringent restrictions have been imposed in Bulgaria, Slovenia and Austria.

"What I am going to say is terrible to hear," Prime Minister Edouard Philippe said, "but we have to limit travel as much as possible even in these circumstances. There cannot be exceptions," he added.

"When you love someone, you have to stop yourself hugging them," Philippe warned a nation where the standard greeting is a kiss on both cheeks. 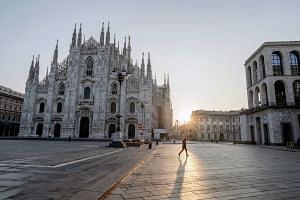 "It's terrible, and counter-intuitive, but please, we have to do it."

With funeral services severely limited, and condolence books withdrawn for fear of infection, there has been no exceptions, even for stars of big screen.

The families of actress and director Tonie Marshall and veteran French star Suzy Delair had to abandon requiem masses for them which would have drawn the cream of French cinema.

The country's large Muslim population has also been taking measures to limit the spread, with the French Muslim Council urging the faithful to limit funerals to just five people.

French funeral group AdVitam has offered to provide "free video transmission of funeral ceremonies to all families" unable to attend.

But even this cannot make up for the thwarted grieving process, experts said.

"I don't deny at all that the measures are well-founded, nor do I deny their urgency, but it is not without human consequences," said Christian de Cacqueray, the head of France's Catholic Funeral Services.

"The trauma of certain families for whom the event will be botched will be terrible," he added.

"For a family member or friend not being able to accompany the deceased to the end can have a lasting shock," Marie-Frederique Bacque, a professor of psychopathology at the University of Strasbourg and author of several studies on mourning, told AFP.

The best solution is to come up with replacement rituals, she said.

"Lighting a candle is the simplest and most evocative symbol, thinking of the person you loved, putting up photos or flowers. It is the best thing to do while waiting to go to the grave later."