Here are the five things to know as we head into the most perilous part.

It is the most important international agreement in Britain's post-war history. It sets out the terms of separation that allow the United Kingdom to depart the EU on March 29 next year in an orderly fashion - and brings with it a 21-month grace period to give everyone time to adjust. Alongside it is a political declaration that sets out how the two sides want to trade in the future - but the details of a free-trade agreement could take years to work out.

British Prime Minister Theresa May has a deal, but it has come at such a high price that not enough members of Parliament are willing to back it. Not yet anyway. Mrs May's party doesn't have a majority so it was always going to be tight, but those lining up against the deal include pro-Brexit hardliners, pro-EU Conservatives, the Northern Irish party that has been propping up Mrs May's government and nearly all of the opposition Labour Party.

The main objection is that the guarantees Mrs May has offered to make sure a new border doesn't emerge on the divided island of Ireland risk binding the UK to EU rules forever. Even within Mrs May's Cabinet, some ministers have misgivings.

This historic decision is going to hang on just a handful of votes in Parliament. Mrs May's whips are trying to poach support in the opposition Labour Party while turning the screws on their own.

WHAT IF SHE LOSES?

Labour will push for a general election, but it's not clear if they will succeed.

The chaos that ensues would also provide the best opportunity for the pro-EU politicians who want a second referendum to engineer a re-run. For now, there is not enough support for it in Parliament, but that could change. Even members of Mrs May's government have hinted this is a possible outcome if the vote is lost. 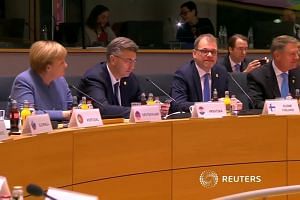 EU urges Britons to back May, says no better Brexit deal

There is a chance that if the deal is voted down, the country would crash out of the bloc into a legal limbo that would snarl trade and freeze up markets. Free trade between Britain and the EU will give way to basic World Trade Organisation tariffs and become subject to border checks.

Delays would be so bad that the government has plans to turn a major highway near the Port of Dover into a holding zone for trucks. Bottlenecks could bring shortages of everything from food to drugs and manufacturing components. Financial contracts would also risk being void.

But there is another scenario: Mrs May is sent back to Brussels to try to extract what would probably be nothing more than token concessions. As markets crashed, MPs could be asked again if they really want to vote for job losses and food shortages.

SO WHEN COULD THERE BE A VOTE IN PARLIAMENT?

It is the question on everyone's lips - especially traders. The expectation is sometime in December. There's some speculation it should happen before another EU summit on Dec 13-14.

One lawmaker calculated it can't happen before Dec 3. Parliament goes into recess on Dec 20, though the vacation could be scrapped at a push.

HOW DOES THE CITY EMERGE FROM THIS?

The deal - once it is through Parliament - brings some relief to London's financial hub because the grace period buys time. But because of the way the talks were structured, there is still not much clarity about how banks will operate in the future.

What is known is that there's a big downgrade from the status quo. That is to be expected, as the UK had long dropped demands for close integration.

UK banks will have to use the same or similar regime to the one United States and Japanese banks use now - it is called "equivalence" and it has lots of pitfalls.

The full extent of the changes will emerge in the final trade agreement, which could take years to negotiate.