KATOWICE (AFP) - By the time 15-year-old Greta Thunberg is 45, tens of millions of people are expected to have fled their homes as climate change unleashes a maelstrom of extreme weather, crop failures and devastating forest fires.

Although it is her parent's generation and those before who have made climate change possible, it is the billions of young people like her who will bear its brunt.

And she has had enough.

Greta has become a leading name in the growing campaign from youth across the planet, pleading to lawmakers and corporations to slash greenhouse gas emissions and avert runaway global warming.

Officials from nearly 200 nations are at a UN climate summit in Poland trying to agree on a rulebook that will make good on the pledges they made under the 2015 Paris agreement.

That treaty aims to limit global temperature rises to well below 2 deg C and beneath the safer threshold of 1.5 deg C if at all possible.

But with just 1 deg C of warming so far, Earth is already being buffeted by superstorms, droughts and flooding made worse by rising seas.

And the World Bank has warned that if action is not taken by world governments, 143 million "climate migrants" will be displaced by 2050.

Greta and her actor father Svante are at the COP24 talks in the Polish mining city of Katowice to call on lawmakers to act now for the good of future generations.

And they want everyone else to do their bit.

After learning about the impacts of people's carbon emissions, Greta insisted that her family become vegan and give up flying.

"For me none of this is sacrifice, I don't need those things," she said. "I understand that some people see it as sacrifice. People don't want to stop flying but it's just something we have to do. There's no other option." . 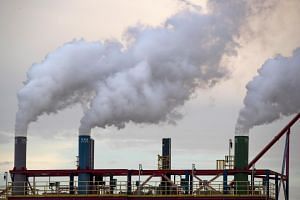 Greta shot to fame back home after she began a one-child strike outside the Swedish Parliament, which she said she will continue until the government commits to action that will honour the promises it made in Paris.

She said that despite the irrefutable evidence of the dangers posed by climate change, politicians still refuse to take the issue seriously.

"If they would have the emissions would have gone down by now. They are still rising," she said.

"This is an existential threat we are facing and it's the biggest crisis humanity has ever faced. We need to do something now because tomorrow it might be too late."