LONDON (REUTERS) - The Extinction Rebellion group of climate change campaigners said it planned to hold a protest at London's Heathrow Airport on Friday (April 19), opening a new front in its demonstrations that have caused transport snarl-ups in the British capital.

Extinction Rebellion has blocked several locations in central London in recent days after it staged a semi-nude protest in parliament earlier this month.

More than 480 people have been arrested this week.

London's police force said it had cancelled some officers' leave and was calling in assistance from other forces to deal with protesters who were causing unacceptable disruption.

The group has called for non-violent civil disobedience to push governments to reduce carbon emissions faster than planned and stop what it says is a global climate crisis.

"The scientific evidence is that if we have not taken dramatic action within the next decade we could face irreversible damage to the natural world and the collapse of our societies," it said. 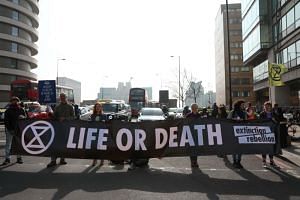 Heathrow said it was working with authorities to address any threat of protests which could disrupt the airport on one of the busiest travel days of the year as the Easter getaway begins.

"While we respect the right to peaceful protest and agree with the need to act on climate change, we don't agree that passengers should have their well-earned Easter Break holiday plans with family and friends disrupted," the airport said in a statement.

London's Metropolitan Police said it had "strong plans in place that would enable it to deploy a significant number of officers to Heathrow and take firm action" if necessary.

"The airport is part of our national infrastructure and we will not allow the illegal activities of protesters to cause further disruption and misery to thousands of travellers," it said in a statement.

Police have said they expect the demonstrations to continue in the next few weeks.