LONDON (AFP) - Some of London's busiest streets re-opened Monday (April 22) for the first time in a week as climate change protesters regrouped and plotted a new course after police made more than 1,000 arrests.

The so-called Extinction Rebellion took over the heart of the British capital in a bid to focus global attention on rising temperatures and sea levels caused by greenhouse gas emissions.

The grassroots group was established last year in Britain by academics and has used social media to become one of the fastest-growing environmental movements worldwide.

But it has abandoned four of five main protests sites in response to a more forceful police response and an outcry from local businesses that claimed a heavy loss in sales.

London Mayor Sadiq Khan also warned Sunday that protests were starting to overstretch the police and limiting their ability to respond to daily crime.

"It simply isn't right to put Londoners' safety at risk like this," Khan said.

Extinction Rebellion organisers retreated by Monday to Marble Arch - a monument on the edge of Hyde Park that allows limited protests to continue without disrupting traffic. 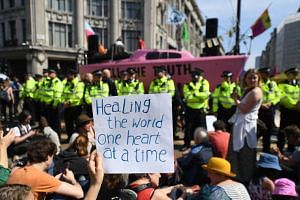 The site has been sanctioned by the police.

About 100 activists also lay day down under the gigantic skeleton of a blue whale hanging from the ceiling of the main hall of London's Natural History Museum for a self-described "die-in".

Extinction Rebellion tweeted that the action was meant to deliver a warning about an oncoming "sixth mass extinction".

The police said they had made 1,065 arrests and charged 53 people since the first protests took over a bridge and renowned London intersections such as Piccadilly and Oxford Circus.

"We remain in frequent contact with the organisers to ensure that the serious disruption to Londoners is brought to a close as soon as possible and that only lawful and peaceful protests continue," a police statement said.

The London campaign has no formal leaders and its future plan remain unclear.

Some organisers want to engage in formal talks with the London mayor and the UK government.

The group's list of demands includes a reduction in greenhouse gas emissions to a net level of zero by 2025 and a halt to biodiversity loss.

It also wants the UK government to "create and be led by the decisions of a Citizens' Assembly on climate and ecological justice".

But it said Monday that strategic issues were still under discussion - and that it may yet decide to resume the street blockades.

"A proposal has been circulated for entering a 'negotiations' phase," a statement said.

"Despite being presented otherwise in the media, this idea remains only a proposal," it added.

"Where we go with Phase Two is up to us."