China's global integration and its leadership role in international affairs through its economic and military might has enabled Beijing to "set norms and rules for the global system', said Singapore's Defence Minister Dr Ng Eng Hen.

Addressing the 52nd Munich Security Conference (MSC) on Saturday (Feb 13), Dr Ng said: "China's integration, rise and involvement in the global international order should be seen as one of the great advances of the past century... China's role in setting norms and new rules is critical. President Xi Jinping said he wanted a new 'historical start point'. But China must articulate its vision for its desired global order."

Dr Ng said it is important for China to envisage rules that will govern and protect global commons, which cover natural resources and public spaces such as oceans, the atmosphere, and outer space.

Speaking at a panel discussion on the topic "China and the International Order(s): Beijing's Role in the World", Dr Ng said: "On what basis should the international order facilitate progress for all countries? I think China needs to do that because its own stability is now dependent on the stability of the overall system."

The Defence Minister said China has made important contributions to Asia's growth in the last decade.

"Over half of China's exports today are produced by foreign-invested firms from countries including Japan, South Korea and Singapore.

"China is now the largest trading partner for all of Asean (Association of Southeast Asian Nations) and Australasia. US$1.3 trillion (S$1.82 trillion) in US Treasuries belong to the Chinese. The Chinese leadership has looked ahead and the 'One Belt, One Road' initiative with the Asian Infrastructure Investment Bank is a substantive movement that will open up Central Asia."

Dr Ng pointed out that China's entry into the Trans-Pacific Partnership (TPP), if Beijing is not precluded from membership, would complement other initiatives. The TPP, which groups 12 member countries in a free trade pact, launched in Auckland earlier this month, brings together Australia, Brunei Darussalam, Canada, Chile, Japan, Malaysia, Mexico, New Zealand, Peru, Singapore, the United States and Vietnam. 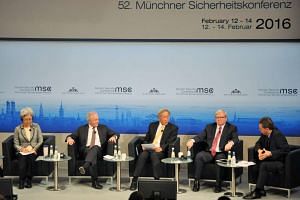 The Defence Minister was joined by other panel speakers which included US Senator Robert Corker; former Prime Minister of Australia and president of the Asia Society Kevin Rudd; and chairman of the Foreign Affairs Committee, National People's Congress of China Fu Ying.

Dr Ng will also speak at the 8th Munich Young Leaders Round Table on Security Policy on Sunday (Feb 14) about the forces that shape the world order. The Munich Young Leaders Round Table brings together young leaders from governments, think-tanks and the private sector from the US, Europe, the Middle-East as well as selected Asia-Pacific countries to discuss issues related to foreign and security policy.