ROME (REUTERS) - China's "Belt and Road" infrastructure plan could be good news for Italy, Prime Minister Giuseppe Conte said on Friday (March 8), confirming that he might sign an accord with Chinese President Xi Jinping later this month.

Xi is due to travel to Italy from March 22-24 and Conte said Rome and Beijing were looking to agree to a framework deal during the state visit, despite reports that the United States is concerned at the prospect of a key ally joining the venture.

"With all the necessary precautions, Italy's accession to a new silk route represents an opportunity for our country," Conte told a foreign policy seminar in the northern city of Genoa.

"It won't mean that the next day we will be forced to do anything. It will allow us to enter into this project and have a dialogue," he added.

The Belt and Road Initiative (BRI), championed by Xi, aims to link China by sea and land with southeast and central Asia, the Middle East, Europe and Africa, through an infrastructure network on the lines of the old Silk Road.

Aside from boosting trade and investment, Xi aims to advance exchanges in areas such as science, technology and culture.

Conte said he planned to attend a BRI summit in China in April and promised to bring European Union trade standards to the ambitious project. 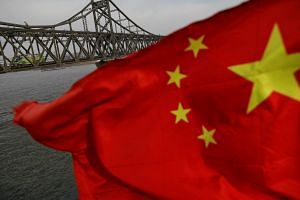 "This is a strategic choice for the country .. and such choices need coordinating with traditional partners. Dialogue with the United States, for example, is constant," he said, dismissing suggestions Washington could penalise Italy.

The United States has recently expressed particular concern over two of China's biggest telecom network equipment companies, Huawei Technologies Cos Ltd and ZTE Corp, saying they work at the behest of the Chinese government and that their equipment could be used to spy on the West.

Both companies have denied that their products are used to spy. Conte said he agreed such concerns needed to be taken seriously and that Rome had to be cautious, but he did not signal he was preparing to impose fresh curbs on the firms.

"Huawei and ZTE have been operating for years in Italy in an advantageous fashion," he said.

If Italy signs, it would be the first Group of Seven major industrialised nation to do so.

The Financial Times reported on Wednesday that the United States was irritated by the prospect of Italy joining the BRI, and had warned the project could significantly damage Rome's international image.

Italy fell into recession at the end of 2018 for the third time in a decade and the government is eager to find ways to boost the economy and revive the stalled construction sector.