LONDON (AFP) - Celebrities and activists dressed as polar bears joined hundreds of thousands of people in colourful rallies across the globe on Sunday (Nov 29) to demand action on climate change, telling world leaders on the eve of a crunch United Nations summit that there is "no planet B".

From Sydney to London, humid Rio to chilly New York, at least 683,000 hit the streets in 2,300 events across 175 countries at the weekend, co-organiser and campaign group Avaaz said, calling it the largest number of people to protest over climate change all at once.

About 50,000 demonstrators gathered in London's Hyde Park alone, many donning animal costumes to resemble bumblebees, cows, polar bears and exotic fish, while others brandished placards bearing stark warnings like "There is no planet B", "Our Children Need a Future" and "We Want 100 per cent Clean Energy". 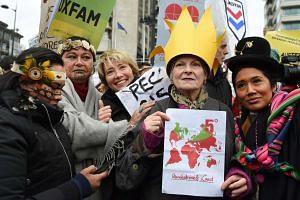 Oscar winners and best-selling musicians rubbed shoulders with protesters from the Pacific islands to Scandinavia.

British actress Emma Thompson, who has campaigned against oil drilling in the Arctic, said she had seen the effects of climate change during a visit there last year.

"It helped me understand in a much more visceral, real way what was happening to the planet," she told AFP.

"So I'm here today to really get behind the climate summit in Paris, which is actually a really historical event."

Rocker Peter Gabriel, founder of the band Genesis, said climate change was "a serious threat" and any pact negotiated in Paris should have "real means of enforcing the talk, which I'm sure will be in abundance".

"Politicians want to get re-elected. If there's enough of us, and this is happening all over the world, then they will respond," he said.

Fashion designer Vivienne Westwood was also among those on the march from Hyde Park to the British Parliament as leaders from 150 countries prepared to meet in Paris to hammer out a plan to cut emissions.

The people-powered protests kicked off with marches across Australia, with 45,000 gathering in Sydney.

"There's nothing more important that I can be doing at the moment than addressing climate change," said Dr Kate Charlesworth, a doctor and mother.

In Copenhagen, which hosted the previous UN climate summit in 2009, some 5,000 people marched to Parliament.

Four of the protesters were dressed as polar bears to promote a sculpture they will bring to Paris this week, depicting a dead bear covered in oil.

Spells of rain failed to dampen spirits in Amsterdam, where 7,000 joined a march energised by drum bands and dancers.

In true Dutch fashion, many turned out on their bikes to highlight pedal power as a means of sustainable energy.

In Paris, where a planned demo was cancelled over security concerns, activists responded by forming a human chain and placing empty shoes on a central square.

"I hope that this chain shakes all the politicians in Europe and the rest of the world to forge a deep and sincere deal," said demonstrator Stephane Eelens.

In Berlin, around 15,000 marched from the central train station to Brandenburg Gate, where a stage was set up decorated with a globe clouded in black smoke.

In Mexico City, about 1,000 people marched to the main square, the sprawling Zocalo, carrying flowers, balloons and banners with slogans such as "I take care of my planet".

"Although many deny it, we are getting close to a problem with climate change and we hope grassroots pressure will make a change," said Mr Victor Lupian, a demonstrator in his 40s.

And in New York, hundreds of people shrugged off the winter cold, including a "Mother Christmas" in knee-length black boots and a "Father Christmas" with a sign reading: "CHRISTMAS CANCELLED DUE TO MELTING NORTH POLE."