LONDON (THE WASHINGTON POST) - Confused about Brexit? You're not alone!

Britain's path to leaving the European Union has gotten rather complicated and long, full of forks in the road, double-backs and more than a few dead ends.

Even seasoned Brexit-watchers have been left at a loss for words.

But have no fear. Below, we've answered some of the most pressing questions about Brexit.

Q: What is Brexit?

British Prime Minister Theresa May has said "Brexit means Brexit." But what that actually means is that Britain is going to leave the European Union. This would mean giving up the automatic free movement and free trade rights that come with EU membership.

Q: Why is Britain leaving the EU?

That's a big debate. But basically, it's because Britain voted in a referendum on June 23, 2016. Those voters who wanted out of the EU and to "take back control" of Britain's laws and borders won 52-48.

Q: So Britain is definitely leaving the EU?

Well, first Britain and the EU need to agree on terms for how it will leave. Then Britain's Parliament will need to agree, too. Also, some Brits want a "People's Vote".

Q: That sounds like a lot. How long do they have to sort it out?

Technically the ultimate deadline is March 29, unless there is an extension agreed upon.

Well, it's taken a while. But Mrs May won approval for her withdrawal agreement from her divided Cabinet on Nov 14.

Q: Wait, this is a withdrawal agreement? Is that different from a trade deal?

Yes. The withdrawal agreement outlines how Britain will leave the EU - things like a timetable for a transition period, what happens to EU nationals living in Britain and the amount of money that Britain has to pay the EU. A trade deal would establish an independent Britain's future economic relationship with the EU.

Q: OK, but this withdrawal agreement has the full support of Britain?

Not by a long way. In fact, there are plenty of people within Mrs May's own ruling Conservative Party who want to remain in the EU - and many hardcore Brexiteers who don't support her plan for the opposite reason.

They do, but they feel like Mrs May has made too many concessions to Europe with this deal.

Q: What sort of Brexit did they want?

Many Brexiteers want an agreement that keeps the economic benefits of the EU but ends free movement, takes away Brussels' control over Britain's trade laws and avoids a hard Irish border (more on all this later).

The most notable ones are Mr Boris Johnson, Mrs May's former foreign secretary, and Mr Jacob Rees Mogg, another member of the Conservatives. But there are many others. 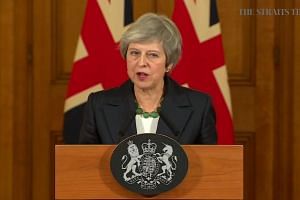 'I’m going to see this through': British PM Theresa May vows to fight for Brexit deal

Brexit Minister quits in latest blow to May

Q: What is the worst-case scenario for Brexit?

Probably the "doomsday" scenario of a no-deal Brexit, whereby Britain has to revert to World Trade Organisation trade rules at its borders because it can't reach an agreement with Europe.

Q: Why would that be so bad?

It would likely cause major changes to British trade, resulting in serious disruption to almost every aspect of Britain's business. An International Monetary Fund projection this week warned that up to eight per cent of Britain's gross domestic product could be lost.

Q: Yikes. Are people prepared for that?

Cadbury's started stockpiling the ingredients for chocolate. So maybe that part of British life will be OK.

Q: How likely is this?

It's definitely possible. One study that came out before Mrs May made her deal estimated there were five possible scenarios for Brexit. All but one resulted in no deal.

Q: So is this likelihood lesser now?

Hardly. There has been a string of resignations from Mrs May's government, casting doubt upon her ability to get her withdrawal agreement through Parliament.

Q: Does the EU want a no-deal for Britain?

European leaders have voiced real concerns about a no-deal Brexit - it could potentially disrupt their own agreements, too, remember. But the EU is also worried about other countries trying to leave, so it is driving a hard bargain with Britain and offering few concessions.

Labour is split on Brexit generally, but is likely to oppose Mrs May's deal for political reasons. However, it is unlikely to stop Brexit anytime soon: Its leader, Mr Jeremy Corbyn, said recently that Brexit could not be stopped.

Q: Does anyone want to stop Brexit?

Yes. Lots of politicians in both the Labour and Conservative parties do want to stop it, while smaller parties, such as the Liberal Democrats, actively campaign against it.

Q: Could Brexit be stopped?

Theoretically, yes - a point Mrs May herself recently alluded to for the first time after reaching her draft agreement. But it would be a risky move politically.

Q: Couldn't they just have a second referendum?

The idea of a second referendum (a "People's Vote") on the final terms has considerable support among the public, but politicians are hesitant, as it could unleash further political chaos.

Q: How would Britain vote if that happened?

Hard to say, but many polls do suggest that British voters have grown more opposed to Brexit over the past two years.

Q: OK, let's back up. What is EU freedom of movement, and why didn't Brexiteers like it?

Citizens of the European Union are entitled to move around the nation states. For many in the pro-Brexit camp, immigration was a major issue with the rest of Europe.

Q: And what is the Customs Union? And the Single Market?

The EU Customs Union means it negotiates trade laws as a bloc, and the Single Market means that Europe has no trade barriers within it. Pro-Brexit voices hope that by leaving Europe, Britain can negotiate its own, better trade deals.

Q: What is the big issue with the Irish border?

If Britain were to leave the Customs Union and the Single Market, there could be a hard border between Northern Ireland and Ireland, where border checks are now minimal.

Q: Why is that a problem?

It could jeopardise the 1998 Good Friday Agreement and, with it, the Northern Ireland peace process. It also would likely have a significant impact on trade. Plus, Mrs May needs to get her political partner in Northern Ireland (the Democratic Unionist Party) and the Irish government on her side.

Q: So does Mrs May's deal solve all this?

Kind of. But also, not really.

In the Brexit withdrawal agreement's 585 pages, the most notable outcome was the creation of a transition period, which would essentially keep Britain in the bloc's Customs Union until 2020, and possibly past then.

Q: And that solves the Irish border problem?

No, but it appears to provide a backstop for sorting it out in the future.

Q: And freedom of movement?

EU nationals living in Britain and Brits living in EU states will retain their rights, but they will have to formally apply for status to remain in the country.

Q: This doesn't sound like it would please everyone.

It doesn't. As we noted before, both pro-Brexit and anti-Brexit camps have voiced opposition.

Q: What happens next?

The plan needs to go to Brussels, where European leaders will debate and vote on Nov 25. That's if Mrs May can keep her job, however.

Q: Wait, Mrs May could lose her job?

Yes. She may be forced from office with a no-confidence vote, or she might even resign. It's unclear who would replace her, though, or whether they'd do a better job.

Q: What would happen then?

It remains to be seen.