LONDON (AFP) - Only a few months ago, crowds of protesters marched through London to demand a second Brexit referendum. But just weeks before the departure date, the momentum has stalled.

A cross-party group of second referendum backers last week declined to put forward a plan for a vote by MPs in the House of Commons, accepting that it would never pass without Corbyn's support.

"We had a little bit of a bad moment, I'll be honest," said Paul Butters of the Best for Britain group, which campaigns to keep the country in the European Union.

He said that for them to succeed, "Corbyn has to move". One of the strongest opponents of Brexit, EU leader Donald Tusk, acknowledged the difficulties at a Brussels press conference on Wednesday (Feb 6).

Addressing those who want Britain to stay in the EU, he said: "I have always been with you, with all my heart.

"But the facts are unmistakable. At the moment, the pro-Brexit stance of the UK prime minister, and the leader of the opposition, rules out this question." However, campaigners insist that theirs has only been a temporary setback and are still biding their time, even as the clock ticks down to Brexit day, March 29.

They argue that the closer Britain gets to leaving the EU without a deal, the more likely they will be to get the Commons majority needed to arrange a referendum.

"There's not a majority in Parliament at the moment for a People's Vote but I don't expect there would be until all options have been exhausted," said Adrian McMenamin, deputy communications director of the People's Vote campaign.

Talk of a second referendum began almost as soon as the first one delivered its shock result in June 2016, but the formal campaign only launched last year.

Backed by some generous donors, including US billionaire George Soros, a number of anti-Brexit groups moved into shared offices near Parliament. 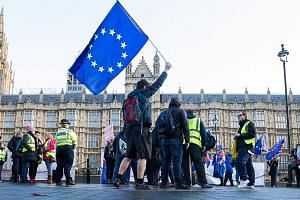 A second referendum could help avoid a Brexit meltdown 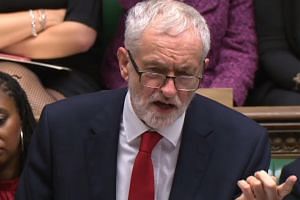 'Special place in hell’ for Brexiteers without a plan, says EU's Tusk

His Open Society Foundations has donated £1.387 million (S$2.44 million) to the main Best for Britain group in the past two years.

It contributed an additional £330,815 to two other pro-European groups, according to figures obtained by AFP.

They have successfully turned a once-marginal idea into something widely debated, which Prime Minister May frequently addresses – if only to argue against it.

Mr McMenamin said Corbyn’s move did not change the basic facts. “Like all the other proposals that have been made about Brexit, they won’t survive public examination,” he told AFP. “And when they don’t, that’s when the road opens up to a People’s Vote.” .

Things were already looking rocky for the referendum campaign after last week’s Commons votes on how to proceed following MPs’ rejection of May’s Brexit deal.

A cross-party group decided not to put forward their plan for a new referendum, conceding that it had no chance of passing.

But campaigners insist it was only a temporary setback, even as the clock ticks down to Brexit day on March 29.

They argue that the closer Britain gets to leaving the EU without a deal, the more likely MPs will back a referendum as the only way out.

Labour party policy says it should support all options on Brexit, including campaigning for a public vote.

More than 100 of the 256 Labour MPs now back a second referendum, with more said to be privately supportive. However, an estimated 30-35 are also strongly opposed.

Labour’s Brexit spokesman, Keir Starmer MP, said the latest offer “does not take the option of a public vote off the table”.

However, pro-European MP Chuka Umunna angrily tweeted: “This is not opposition, it is the facilitation of a deal which will make this country poorer.” .

Even if Corbyn changes his mind, more MPs from May's Conservative party would also need to support a referendum as it would require passing legislation in Parliament.

Fewer than a dozen currently back the idea in public, and those that do face a torrent of abuse on social media.

Professor John Curtice of the University of Strathclyde, an expert on polling, said public backing for a new vote varies widely depending on the question asked.

"The problem that the People's Vote has is that it's a 'Remain' project," he told AFP, noting that almost everybody who campaigns for it wants to reverse Brexit.

"I don't think there is a single 'Leave' Conservative MP who has come on board." Fewer than a dozen of May’s Conservative MPs currently back a new vote, but more would be needed to pass the necessary legislation.

May is already trying to change her Brexit deal to satisfy demands from Tory MPs on the Irish border arrangements.

But there is a real risk Parliament will never agree - leaving Britain heading for a damaging "no-deal" exit.

One pro-European Conservative MP told AFP that up to 50 of his colleagues might back a new vote if it was the only way to avoid no deal.

"But the circumstances would have to be as stark as that," he admitted.